Ami670, the author of Nebula the Cat, considers this page to be unfinished. As such, some sections may change.

This is an article about Nebula the Cat, a character created by HauntedAlchemist. It is currently owned by Jake as of 7/11/17. 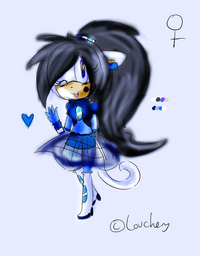 Nebula the Cat, also known by her stage name Starrlite, is an 18 year old cat who holds fascination over the galaxy and space itself. She is a very passionate musician and DJ and uses it to stim due to her having autism. But she also plays music for a living as stated above and also because she is a fanatic for music. Music is her life and has always been a part of her life.

She resides in Amare, a town not too far from Sileo, but she often performs in Sileo.

Nebula is an 18 year old cat that is 3'4" and weighs about 70 pounds. Her fur color is white that's tinted slightly blue. Unlike most cats, her muzzle and inner ears are a rather tan peach color rather than white. Her eye color is indigo. She has ebony black hair that is really long and is always seen held up in a pony tail. Not to mention her hair is never straight; it's in a messy like manner, and almost as if she doesn't always brush it. The rubber band is an indigo color. On her eyes are two eyelashes.

Nebula's whole clothing are the colors blue or white. Her dress is blue, but the upper part of her dress is a darker blue. On her dress is an attached transparent blue skirt, similar in the manner of a hoop skirt. Her sleeves are a light blue color, and on her sleeves are blue and white stripped arm warmers. She also wears light blue tights, and to go along with her tights are white boots that go past her ankle but below her knee.

Nebula is generally a soft spoken person, and she has a big strong passion about the things she loves. She gets invested in the things she does, and she takes great pride in what she does. She is very considerate and generally also a mellow person; she doesn't like too much excitement in her life. Nebula has expressed wanting to have a simple but everlasting fun life, especially with her crush.

Attack: 3 - Nebula does not partake in fighting; she's not necessarily a pacifist but she is not the fighting type.

Defense: 6 - Once said above, she doesn't partake in fighting but her defense is fairly alright.

Speed: 9 - She is extremely agile and fast, and can run a lot faster than most of the people in her town.

Evasion: 8 - Due to her speed, she can get away from attacks or most situations fairly quickly.

Intelligence: 8.5 - She retains information pretty well, and she did very well in her school days.

Skills: 10 - Nebula takes great pride in her skills and does them with a lot of attention, love and care. She has been making music since she was about four years old.

Accuracy: 9 - As a musician, Nebula is very keen and prone to high accuracy, being able to produce music from memory and can replicate certain beats with almost no fail.

Stamina: 8 - Despite not being much of an offensive fighter, if for any reason something were to happen to her, it would take some blows to take her down.

Tolerance: 7 - She is very resilient to attacks and can withstand pain in the long run.

Retrieved from "https://sonicfanon.fandom.com/wiki/Nebula_the_Cat?oldid=1853722"
Community content is available under CC-BY-SA unless otherwise noted.