Nebula is a fictional, fourteen-years-old, female, violet, anthropomorphic/mobianoid hedgehog alien who comes from another planet who was sent to Earth to destroy Shadow the Hedgehog, the last of black arms by destroy Earth.

When Nebula began to understand that Shadow is not like the other black arms, she joined the Guardian Units of Nations to be paid with resources from Earth that will be teleport to her home planet.

I was first inspired by and had thought she would be a way of life as Shadow, but would be the first female ultimate life form, created by Eggman and physical 7 years and 15 old. I was inspired by humanoid rove thousands and eventually ombestembe that she would be an anthropomorphic animal version of humanoid aliens. I changed her skin color to lavendel instead of normal skin color on her muzzle and inside her airs since it is more perfect and she would be the first Sonic character with no regular color on the the skin and since some humanoid aliens have no regular skin color too. I applied and got the inspiration of a Sonic fan character called "Amber the Hedgehog" by her long tousled hairstyle to design my own spiky hairstyle to my character (a long tousled hairstyle without more than two spikes), but know she have three spikres of her final spikey hair style.

I got the inspiration of futuristic cuffs to design own wrist cuffs and boots and turtleneck of Molly from Sonic X and Mindy Latour from Sonic Underground.

At first I had thought she was named after Pandora, the first woman on earth in Greek mythology, after been changed I navnt her to mimicry because of her shapeshifting powers and eventually changed my mind to name Nebula.

Nebula is an anthropomorphic hedgehog-like alien with purple fur covering most of her body, lavender skin covering her muzzle and violet eyes. She has two head spikes drop back from the back of the head and a short tail points up.

Not much is known about Nebula's early life, she comes from a another planet and was sent to Earth to destroy the Black Arms by destroy Earth. 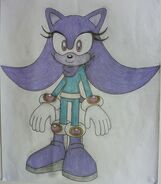 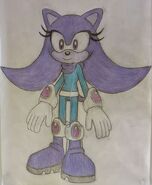 2018
Add a photo to this gallery
Retrieved from "https://sonicfanon.fandom.com/wiki/Nebula?oldid=1866276"
Community content is available under CC-BY-SA unless otherwise noted.