This is an article about Nazuna the Bobtail, a character created by Alphonse Uprising on 02/28/2018. 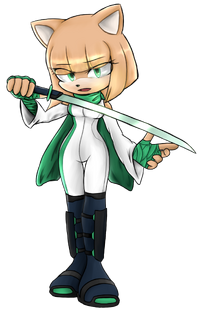 I will gladly restore the good name of my family, but first, I must finish what I started.

Nazuna Kazemoto (風本 薺, Kazemoto Nazuna) is a Japanese ronin from Midori and a main character in Cybermania. After the death of her master, Sensei Nobukazu, Nazuna was seen as nothing more as an outcast by the society she used to protect.

Nazuna is a loner. While she used to prefer working for others as a samurai, she becomes a lone wolf after being rejected in her society. She is reluctant in teaming up with others unless it somehow benefits her, be it redemption or forgiveness.

Nazuna is easily annoyed with referred to with honorifics, and she humbly rejects any kind of compliments given to her-- she doesn't believe she deserves them as a ronin, after all. When she's sorry to someone she cares about, she shows it. As it is customary to bow when apologising, Nazuna kneels on the floor and bows deeply, a sign of being very sorry and begging for forgiveness. Forgiveness, is the only thing she asks for.

She enjoys eating sweets like the custom mochi dango, which are blobs of mochi on sticks. She also enjoys some leisurely competition with other swordsmen, and gladly partakes in seeing the world and all that it offers. All in all, while she can open up to others if she shares similar interests to her, she's only here to finish what she started and then finally die.

Born into a wealthy family in the Western Japanese village of Midori, Nazuna would be the heiress to wield the fabled Jaded Sword. Her father, the former wielder, was assassinated by members of the Ikari Syndicate, a crime organisation specialising in illegal weapons, in a failed attempt to uses the sword for their own nefarious purposes.

However, one day, the sensei would die at 116 years old, but just before Nazuna perform seppuku to honour the Samurai Code, the Ikari Syndicate returns. They ransack the village in search of Nazuna and the Jaded Sword. Nazuna was outnumbered, but she fights anyways, as much as she could for the ownership her sword. However, after a long and hard fight, the Jaded Sword is shattered. Immediately afterwards, Nazuna loses control of the sword's magic, accidentally unleashing thousands of spirits out into the land and haunting the village as the army retreats.

Nazuna, now a masterless ronin responsible for destroying the village, is shamed by civilians around her. She becomes a shadow of her former self, going against the samurai code while trying to undo the damage that she caused. Completely rejected by the society she once fought for, she rebuilds the now-powerless Jaded Sword with a stronger material, and she wanders across the country while exorcising as many spirits as she can.

Afterwards, she promises to ultimately honour the code and die.

The Jaded Sword is Nazuna's personal weapon. It is a katana with a green blade made out of jadeite, a hard mineral. The blade is enchanted with spirits known as seirei, or spirits representing Nazuna's long-deceased ancestors and familiars. With this magic, the sword can create powerful effects using different combinations of sword movements and spells. Spells are activated by performing a move and chanting the name out loud for a desired effect. Stronger effects have longer spells. If Nazuna is interrupted while performing a spell, that move is cancelled.

千の矢の力で刺して! (Charge with the might of a thousand arrows!): Pulling the sword back and shouting this spell, Nazuna will rapidly lunge forwards, hitting anyone in the way.

風は嵐になります！ (The wind becomes a storm!): Spinning the sword twice and then pointing it forwards will send a strong wind that blows enemies back.

津波はうなる！ (The tsunami roars!): Swinging the sword creates a curved wave of energy towards an enemy. Maintaining this position, she can create multiple waves without having to repeat the spell.

Spirit vision: With the Jaded Sword, Nazuna is capable of detecting and interacting with spirits and yokai. There, she can see projections of her late family members like Taro and Daichi, and can even communicate with them if she wanted to. 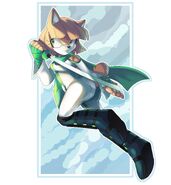 Add a photo to this gallery
Retrieved from "https://sonicfanon.fandom.com/wiki/Nazuna_the_Bobtail?oldid=1865188"
Community content is available under CC-BY-SA unless otherwise noted.