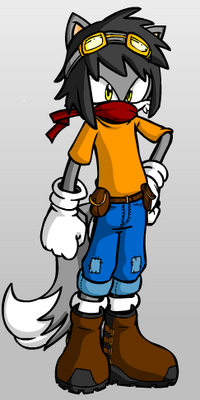 Nathan is a wolf with a good fighting spirit, as he may challenge anyone. However, he also helps at times.

Nathan also is somewhat intelligent, and he can think good techniques on fight quickly, and also wants to be an inventor

This character's fourstat code is 5865 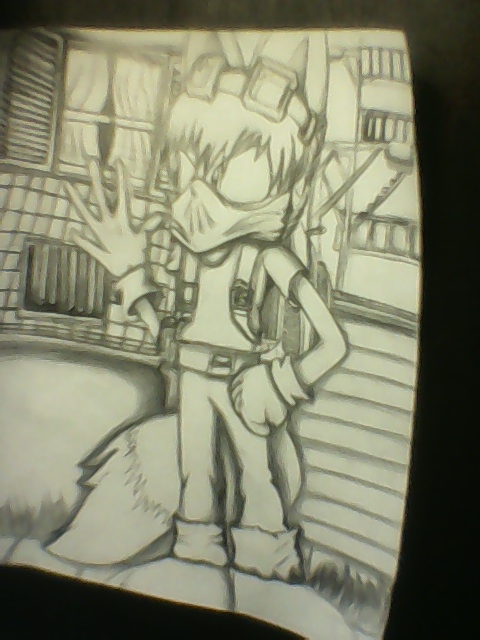 Nathan is a grey wolf with white fur on his chest and rounding his mouth. He wears a red scarf, covering his mouth, a yellow shirt, blue pants, brown shoes, white gloves and has yellow goggles on his forehead. His tail is also grey with the end of it being white. He also carries a brown backpack. (Still not visible)

Nathan has a somewhat friendly personality, and likes fighting. He is almost always trying to do his best, and can be rather easygoing when meeting people, but sometimes tries to be serious around some people.

Nathan also used to enjoy math, and was really good at it. He still has some knowledge of it, and still seems to like math.

Nathan also seems to like puzzles, and can be quite analytical. This, combined with his high knowledge at math, can make some complicated situations seem like easy to him.

Nathan was living a mostly normal life at Sylvan Island being cared by his fathers, along with his big brother, Beck. He was jealous at him for having inherited fire powers, while he didn't. However, Beck told him he may one day have some kind of power.

However, when Nathan was 6, when their fathers left them in home, robots were sent to attack Sylvan Island. When the Robots started taking their house, they had to sneak out of the house. While they were out, they were sneaking th robots to search a safe place. Shortly after that, one of the people defending the island found them, and he told them they must go out of the island to find a safe place, then he guided them to a place where they could do that: A place where helicopters were evacuating the people as soon as possible. They were both worried about their parents, but they had no other option than to go. They got to an helicopter, and soon they were taken out of the island. The fate of their fathers is still unknown.

When their helicopter landed, it seemed to have landed on a coast. Meanwhile, Nathan and Beck were cared by a fox called Dylan. People were wondering how will they survive. Someone said they may need to buy a shelter. People were thinking about it, and some time later, everyone started building homes. They seemed to be built at a good pace. A long time later, various homes were built, and everyone was proud of the hard work they put on the houses, they were enough as for the place to be considered town. Knowing that, they called the place "Sylvan Coast Town". When Nathan was 9, people now started needing electricity. Various people, including Nathan, went on a trip to search for electrical sources. Not long later, they found an abandoned electrical plant. They went to investigate it, and it seemed that there was still some leftover electrity. However, while they were on a plataform, the floor crumbled where Nathan standed, and he fell on a generator. Thankfully, the electricity wasn't as much as to kill him, but he still was seriously hurt. However, some days later, when Nathan was felling better, he accidentally shoot a zap to a tree. When Nathan saw this, he discovered he had electric powers. It was just as Beck said, he gained Electric powers. He guessed that fall on that generator was the responsible for giving him the powers.

Four years passed, Nathan was 10 years old and, along with Beck, got experienced in using their powers. Some days later an helicopter landed, saying Sylvan Island was rid of the mysterious invaders. Some stayed on their homes on the shore, but Nathan and Beck got on the helicopter and went back to Sylvan City. They finally returned with their parents, and told them what happened. Their fathers were surprised that Nathan could survive an electric discharge, but even more so when he got electric powers out of that experience. They started to train both even further to use their powers to their full extent, gaining the ability to manipulate the energy to be able to make new moves from their energy.

Then other four years passed.

Nathan was now 14, and had learned to use his powers to his full extent. He invented quite some attacks from his energy, being even able to generate claws from his energy. He was ready to go out of the island by himself. His fathers asked him if he wanted to go out of the island to explore the world and meet some friends. He did want to do it, so he started preparing, putting some of his things on a backpack to carry out there and practicing with his powers. When he was ready to leave, his brother gave him some Electrite as a farewell gift, since there may be someone who can make something with it. He got on an helicopter and, while his family cheered him, he went back to the small town built during the attack on Sylvan Island, now called Sylvan Town. Thus it starts his own adventure...

Nathan has the following items.

Electrite
An electric Elemental stone given by Beck to him as a farewell gift. Nathan carries it knowing there may be someone who can make something with it.

Backpack
A backpack Nathan carries since he left Sylvan City. It does about what you'd expect a backpack would do.

Levitation
Nathan posesses levitation. He was born with this ability. He can levitate infinitely while slighty over the floor, and can use this to fall slowly. Despite this, he usually stands on the floor rather than levitate.

Nathab also has electric power. He obtained these by falling onto an old but still charged electric generator. The energy on the generator was quite a bit, but the energy managed to stay on Nathan. His energy takes some time to charge, but he can charge this and use it for some attacks. When charging, energy flows over him. If his electric energy is high, electrical aura will flow over his hands, covering more of his hands the more he has, with it being completly around his hands when in full charge. Despite how it looks, the aura on his hands is harmless and dosen't make any noise.
These are his attacks:

Zap
Nathan can shoot a small jolt of electricity. This is a weak, yet fast attack, and costs little energy. Nathan uses this when low in energy.

Thunder
Nathan can alm with his hands at up to 2 directions to shoot a beam that pierces any target. The pierce is not lethal.

Electric Sphere
Charging energy on it's hands, Nathan can make a electric sphere appear on his hands, being able to throw it. The sphere bounces off targets and stays on the floor for a while.

Electric Claws
Also charges energy on his hands, but instead he gets electric claws. He can use this to use a wider variety of melee attacks.

Charge Heal
Nathan can turn some of his electric energy into life energy to heal himself. However, the healing isn't very high, and consumes a high amount of energy to do this.

Thunder Bolt
Nathan favorite attack, and mostly his opening attack. He shoots a thunder upwards, and then thunders start falling randomly on a ratio. His most energy consuming skill, but also the most powerful. He can also increase or decrease the ratio where the thunders fall, make the thunders fall on a set place, or even delay their throw, but at the cost of consuming more energy.

Electric Rain
A delayed-type attack. Nathan charges a hunk of electricity on his hands, turns it into a sphere, then flings it upwards, with the sphere floating on the air, either at a low attitude or on the sky. After some time has passed, the sphere blows up, creating a lot of small electric projectiles that will start raining down to the ground, being able to cause high damage due to the amount of projectiles. Between the launch and the projectile rain, there's time to continue the fight, possibly also having time to think an strategy to dodge the projectiles.

Discharge
Nathan starts concentrating his energy onto all his body, causing his body to be surrounded by electricity, damaging anyone who touches him.

Thunder Wave
Nathan shoots a small bolt that hardly does any damage. However, if it hits, it is sure to paralyze the target.

Thunder Wire
A wire made of electricity. Nathan shoots a wire of which the end is a claw, which can cling on surfaces or grab things. When it grabs someone, Nathan can discharge electricity towards the wire to cause damage to the victim.

Thunder Dash
A dash where Nathan is completly covered in electricity. He can use it on ground or in air, but in ground he needs to gain speed to be able to perform it. In air he gains an impulse and will float while doing this, but he consumes more energy. Nathan likes to do a small hop in ground before using it to do the airbone one, even though he knows it uses more energy

Cloud Summon
Nathan can summon a cloud that he can ride like an extreme gear. He can also use some clouds as weapons, making them shoot thunders by charging them. Shooting a thunder at them causes them to redirect it down, so it can be used as a shield or when there's no other way to all down. They consume quite a bit of energy, though.

Nathan has the potential to achieve several super forms. He, however, dosen't knows which ones are or how to achieve them.

Fast Thinking
One of his abilities is that he has very fast thinking, which is very useful on some conditions. This ability name is self explantatory.

High Activity (Name Pending)
Nathan electric power also makes him very active, so he dosen't needs as much sleep as a normal Mobian. He can also wake up earlier from induced sleep.

Fast Reaction
One of his skills is fast reactions. When he was a kid he had bad reactions. He trained them, and now he can react faster to various things. But he still can't react to unexpected attacks.

Fast Attacking
Nathan has very fast speed of attack, so he can chain many techniques and quickly immovilize the target

Roll Attack
Nathan rolls with his arms extended and his hands closed while dashing to attack quickly on dash.

Volt Combo
Nathan own combo skill. He first does a Roll Attack, then he does 10 punches and kicks. After that, he does a Thunder Dash grabbing the opponent, after that, he unleashes a backflip kick, ending the combo with an Electric Claw. The opponent gets trapped in the combo if the Roll Attack hits. He usually does a Zap Paralyze to start the combo.

Nathan isn't very physically strong, so he has to depend on the Electric Claws if he hopes to have a chance on close combat; however, this problem is worsened by his similarly weak physical defense. While he can take energy attacks with lower damage, Nathan cannot take a lot of physical punishment, so he also has to avoid them.

As his main power is Electricity, it can easily be guarded by non-conducting sources.

Nathan's main weakness, however, are ice-based attacks. Nathan doesn't take cold too well, so he can be weakened by these. Furthermore, he can't attack or run as fast when he has any limb frozen, and being frozen could leave him exposed to a strong physical attack.

Retrieved from "https://sonicfanon.fandom.com/wiki/Nathan_the_Wolf?oldid=1710520"
Community content is available under CC-BY-SA unless otherwise noted.