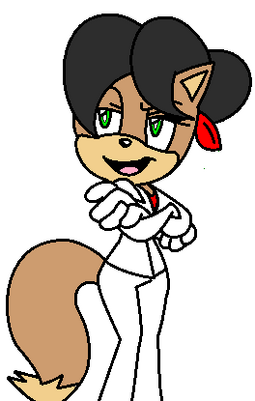 Natalya Vixi (more commonly known as Samantha Vixi) is a mobian fox and a researcher for G.U.N., often working close with Team Dark.

Samantha is a mobian fox with brown fur, lighter brown fur on her muzzle, inside her ears, presumably on her stomach and on the tip of her tail, green eyes with white on the insides of her pupils, indicating that she's blind, and black hair tied into a bun by a red ribbon.

For attire, she wears a white lab coat and pants with a red shirt underneath, matching white slipper-like shoes and white gloves.

Not much is known about Samantha's life other than that she was raised by a G.U.N. couple in Central City and joined G.U.N. at an early age.

Samantha is very kind and trusting. Because of being blind, she sense those around her and feels the prescence they give around her to judge what kind of person they really are. Samantha is a very brave individual and doesn't like being treated differently because of her disability.

Despite being blind, Samantha is a tech expert and has a high intelligence. She often times uses machines that she built to aid her in fights while not on par with Dr. Eggman.

As stated, Samantha is blind, and this often times puts her at a disadvantage. She heavily relies on sound and this can sometimes works against her.

Retrieved from "https://sonicfanon.fandom.com/wiki/Natalya_%22Samantha%22_Vixi?oldid=1822415"
Community content is available under CC-BY-SA unless otherwise noted.