Start a Wiki
Spoiler warning: Spoilers for A Different Kind of Normal below. Read at your own risk.
This is an article about Natalie Walker, a character created by Skyblade743 on 6/4/2017.

The author of Natalie Walker considers this page to be unfinished. As such, some sections may change.

No, I’m not normal, nor are my friends, nor are my family. But we’re people. We laugh. We love. And we can do things people wouldn’t believe until they saw us. And maybe, if we stick together, we can find something better: a different kind of normal. 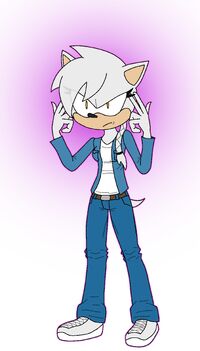 Natalie Walker is the daughter of Sasha Walker and Vendeta the Hedgehog and the main protagonist of A Different Kind of Normal. She is a member of the Powers Club who possesses telepathic powers.

Natalie is a white Mobian hedgehog has a relatively average height and build for a woman of her age. She has white hair tied in a braid that falls down to her shoulder, and also a light fringe that occasionally obscures her right eye. She also has golden-brown eyes like her father.

In terms of attire, she usually wears a white T-Shirt and blue denim jacket. She also wears jeans and white trainers.

To many, Natalie is withdrawn, rarely saying anything other than snarky remarks. She generally has an “I don’t care” attitude towards many. However, Natalie only acts this way towards people she doesn’t like or know, and acts very differently towards her friends.

Natalie tends to be very open towards her friends, usually trusting them completely. She’s still quite snarky, but not in an offensive way. She still sometimes comes across like she’s very casual, although with less of the uncaring attitude she had before.

Although she’s a quick thinker under pressure, especially with the rise of her powers, Natalie can be too trusting of others and is easily shaken or manipulated, which can be exploited by others, namely Kable the Fox. She’s also surprisingly easy to anger, especially when others try to harm Angel. Moral wise, she has traditional heroic values which can come across as slightly naive.

Natalie was born in Iravia to Vendeta and Sasha Angel. However, Vendeta disappeared for a job with the Guardians and never came back when she was 4, and Sasha refused to mention Vendeta after they met again later during the Guardian Civil War, so Natalie grew up knowing little about her father. She went to school in Iravia and made friends with Marcee Archer, who had been there for 3 years, and Oliver Dragen, who had recently moved to Iravia. The three were best friends for years, but eventually the Walkers moved to Westopolis as Sasha was looking for a better job, although the 3 still keep in touch.

At school in Iravia, Natalie didn’t have any friends and was bullied for her accent just generally being odd compared to the rest of the students. At this point, her powers started to manifest themselves, meaning she completely avoided a barrage of punches from one bully and caused another to crumple to the floor in pain. After coming home from the latter incident, Sasha told Natalie that she had discovered a club for people with powers run by Johnathon Persona, which she hoped would make her come to terms with her powers. This was the Powers Club, who would later become her closest friends.

Natalie possesses telepathy, which can manifest itself in various forms. She can read people’s minds from a long way away, with thoughts manifesting themselves as whispers to her. She can also control the brain’s nervous system, meaning she can make people do what she wants, dull pain, and even make herself or others invisible, as well as creating illusions. Natalie can also enter people’s mind or their memories by touching their head, allowing her to effectively walk through their memories and see them in real time.

Natalie copied everything her mother knew about swordplay to her own mind, and as such is decent at swordfighting. She sometimes uses her illusion powers to create a katana that, while not being physical, still makes the opponent feel like they're being slashed.

Natalie can be too trusting of others and is easily shaken or manipulated, which can be exploited. Her temper can also be exploited. She also has minor vertigo (the fear of heights), although she can usually ignore it unless she’s really high up. Her physical combat skills are also less than optimal, as although she can read an opponent's mind and effectively copy their experience of combat to her own mind, she still doesn't fully understand the information she has. She is training with Angel and Rugal to remedy this.

On a powers level, all of Natalie’s telepathic abilities except her mind reading can only affect one person at a time, although she reckons she can do multiple people with practice. Also, her powers to do not work on artificial beings like robots or Ice, and she can receive psychic backlash from people with multiple personalities like Johnathon Persona. Those with strong willpower can also shake off her influence if she tries to mind control them.

Natalie didn’t fall in love with Angel instantly, but over time the two developed a strong romantic bond. Although Natalie knows Angel is struggling to come to terms with her sexuality and has anxiety problems, she is trying to help her as much as possible. 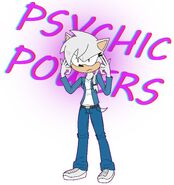 Art by XophPsycho
Add a photo to this gallery

Retrieved from "https://sonicfanon.fandom.com/wiki/Natalie_Walker?oldid=1871680"
Community content is available under CC-BY-SA unless otherwise noted.