Start a Wiki
This is an article about Nash the Shark, a character created by Konnichiku on 05/17/2017. 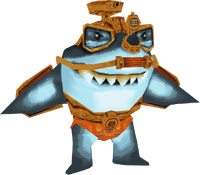 Nash the Shark is a hyperactive alien shark from the planet of Barin. He's designed to keep moving without any rest. He is the best friend of Amy Rose. He was also one of the members of the Sonic Forces.

Nash is a blue and silver shark wearing goggles filled with water. He wears a cap that has a strange mechanical propeller on it. Additionally, he has legs.

Nash is highly energetic, and demands that he do things instantly so he can keep moving. He gets very upset and cries if someone takes away something he owns or if he goes to sleep. He's also very competitive and enjoys fighting. However, he throws a tantrum if he loses. He cheers up once he starts playing with his yo-yo, something he actually stops for.

Nash was born on Barin, designed to move 24/7 without any breaks, and was once the racing champion of that planet as noted by Velo Citadel. After his brain was hacked and he was put to sleep, Nash left Barin and went to Mobius where he found Amy Rose. The two befriended each other, with Amy helping Nash get over the loss of his key by giving him a yo-yo. When Sonic stepped into an alternate universe to overthrow Infinite's rule over it, he brought along Nash. Nash joined the Sonic Forces in that timeline until he came back to Mobius.

Nash was designed to be in motion at all times. His goggles were filled with water to keep his eyes open.

Nash can run at superhuman speeds, and it's usually hard to catch up with him. He can't outrun Sonic, though.

Nash is an excellent swimmer, as he's a shark. This was demonstrated during his time in the Sonic Forces.

Nash hates being put to sleep and will go insane if somebody takes something away from him. He hates boredom even more than Sonic.

Retrieved from "https://sonicfanon.fandom.com/wiki/Nash_the_Shark?oldid=1798102"
Community content is available under CC-BY-SA unless otherwise noted.