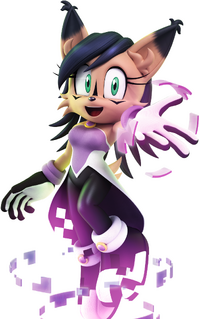 NICOLE the Holo-Lynx is an artificial intelligence created by Dr. Ellidy as an attempt to save his dying daughter, Nikki, via digitalization. When it didn't work, NICOLE was given to a young Sally Acorn who came her trusted companion. As an A.I., NICOLE can interact with most machinery and computers and can even develop mentally and emotionally. While initially cold, her time with the Freedom Fighters helped her with the latter as they sparked life into the A.I. With a Power Ring, NICOLE can create a holographic body for herself in the form of a lynx.

NICOLE's basic appearance is that of a portable hand-held computer. Her hand-held is compact and grey in color with a flip-top, a screen, and several buttons. There is a small slot on the top for inserting a Power Ring.

NICOLE's holographic appearance is that of a mobian lynx with brown and black stripes on the bridge of her nose and underneath both her eyes. She also has medium-length black hair with two large plugs acting like pigtails and green eyes. The tips of her ears are also light blue. For attire, she wears a purple and white shoulder-less and sleeve-less dress that splits down with a small broach. She also has black pants, white and black gloves and shoes, purple cuffs, and white cuffs.

NICOLE was first created by Dr. Ellidy as he was trying to digitize the conscious of Nikki, his dying daughter, during his time with the Kingdom of Acorn. When NICOLE showed no emotion upon activation, instead of being deleted, she was given to a young Sally Acorn and was named after a previous queen in the Acorn linage. Sally would soon become quite fond of NICOLE.

When Dr. Eggman took control over of Mobotropolis, NICOLE was brought to Knothole Village by Sally. Ever since then, NICOLE would begin to grow lifelike while being around the children that would become the Freedom Fighters. She would experiment with her output until she was able to breifly manifest a holographic form and continued to experiment until she could manifest it for longer periods using a Power Ring.

Initially, NICOLE was cold and incapable of feeling emotion. Logic was her only real motivation.

As time went on, NICOLE became more life-like in demeanor and has many traits that a living being has. She is friendly, helpful, and loyal, and is able to show concern for her friends' health and safety but is also known to mock others, or show defiance. Despite her growth, there have been times when NICOLE was out-of-touch with her life-like self.

As a computer, NICOLE can interact with mechanical systems, allowing her to access and download information or take control of unfriendly machines. She also possesses a genius-level intellect, having information from hundreds of databases.

Using a Power Ring, NICOLE can manifest a holographic form with functioning limbs and senses. While this form can be attacked, NICOLE won't receive damage as long as her hand-held isn't harmed. NICOLE also has the power to create force fields strong enough to block laser-fire.

With a Red Star Ring, NICOLE can transform into Overlocked NICOLE. In this form, all of her natural skills are enhanced, including her hacking ability.

Retrieved from "https://sonicfanon.fandom.com/wiki/NICOLE_the_Holo-Lynx_(Marshalia13%27s_Universe)?oldid=1851536"
Community content is available under CC-BY-SA unless otherwise noted.