This article is for the use of the Mystic Ruins in anybody's continutity, fanfic, and/or roleplay.

The Mystic Ruins are the remains of an ancient temple, once inhabited by the Echidnas, how abandoned and surrounded by a jungle and many mountains. The ruins are explored and studied by archaeologists, eager to learn about the Echidnas' past. Entering the Mystic Ruins will take you to the Lost World.

The Chronicles of Sonic the Hedgehog: Rise of the Heroes

Mystic Ruins appear as the second level in the game. The heroes pass from there in order to reach the Angel Island.

While the actual Mystic Ruins will not be in the game, an Action Stage called Ancient Past is planned for either for Tikal herself or those she chooses. It is based on the Mystic Ruins during the time Knuckles tribe fought the Gizoids or right before the rising of Angel Island. The purpose of this stage is of yet undecided or if it will be included in the game as Tikal will still have her power to review the past.

Mystic Ruins plays a minimal role and is in Chapter 6 of the Blue Blur. Here is where Sonic and co find Knuckles, Silver and Blaze. There is a level, though for it. 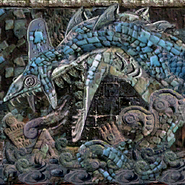 mural of the serpent god chaos
Add a photo to this gallery
Retrieved from "https://sonicfanon.fandom.com/wiki/Mystic_Ruins?oldid=1867850"
Community content is available under CC-BY-SA unless otherwise noted.