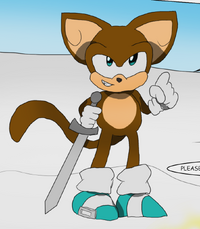 Mystic Monkey is a fan character from the Sonic the Hedgehog comic series. He had only one fan comic story so far that explains his origins, so far no further comics are made.

Mystic Monkey is an anthropomorphic rhesus macaque with brown fur that covers most of his body, peach skin that covers his muzzle and torso, and aqua-green eyes. He wears two light-weight, hyper friction resistant green-blue sneakers with a white strap, cuffs and a silver buckle, and a pair of white gloves with sock-like cuffs.

Mystic Monkey was originally from the Mobius of Fleetway Sonic the Comic. During Robotnik's rule he decided to take up arms (a sword) and become a Freedom Fighter. Sadly he did not live up to his hero Sonic's expectation who, at the time, was more of a jerk. Disheartened he wondered Mobius alone until someone like him encourages him to be the hero he wants to be. His adventure lead him to Snowcap Mountain Zone where after passing all the trials, met with the Ring of Eternity. The ring tells that not only can it take Mystic through time and space but to alternate worlds where Mystic can belong and fufill his destiny as the hero he wants to be. Mystic accepts and travels to the Mobius of Archie Sonic the Hedgehog.

Mystic arrives on Pre-SGW Mobius, just outside of Robotropolis. Further comic of Mystic Monkey are yet made continuing his story.

Stories in mind are joining the refugees at Knothole Village and training to become a Freedom Fighter, in particular being friends with Antoine D'Coolette who teaches him the skill of defensive swordplay and bachelor cooking. He also develops an unrequitted crush for Mina Mongoose, even with Antoines help, fails to get her attention.

Other stories in mind

Mystic is an inquisitive monkey with a strong desire to commit to a heroic cause but is held back by insecurities in himself and his abilities as a hero. He is also prone to hero worship as he looks up to Sonic the Hedgehog who drives his desire to be more heroic. Mystic is kind, polite and loyal to those he trust and yet to recognise his own strength of will and loyalty if his confidence is ever tested.

Mystic speaks with a faint accent that is often mistaken as Mercian. It is particularly noticable from his written dialogue. While Archieverse mobians dialogue is written in American English, Mystic's dialogue is Written in British English.

Mystic is a great practitioner of swordsmanship and excels with the use of his sword. While he was a novice with the sword where he was from, Antoine D'Coolette took in Mystic to train in sword-fighting and improoving his skill with the sword.

As a swordsman, Mystic uses a sword as his primary weapon in combat. His primary choice of sword is an arming sword. It has a thin wrapped grip with a thick gross-guard that curves slightly upward, towards the blade. The blade itself is double-edged. Though simple, it is quite durable and has an impressive cutting edge, easily cleaving through metal and other solid substances with little effort.

Mystic Monkey idolized Sonic as a hero and wanted to be a freedom fighter just like him. However his first meeting with Sonic shows he was dissapointed in him as he asked him to stop what he was doing for his sake. Mystic perseveres and travel Mobius seeking purpose in his life.

Cedric meets Mystic and the two discuss Sonic together, encouraging Mystic to forgive Sonic's brash behavior towards him and encourahes him to be more himself than trying to be someone else. He gives Mystic new hope to be a hero as he continues on his travels.

Preview of the comic.

The full comic: Monkey in the Middle

Retrieved from "https://sonicfanon.fandom.com/wiki/Mystic_Monkey_(Comic)?oldid=1850235"
Community content is available under CC-BY-SA unless otherwise noted.