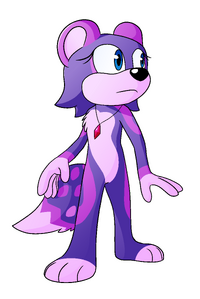 Mura the Mink's appearance from memory with colors altered for the sake of not making your eyes bleed. Depicted without clothes due to the specificity of her markings and the design of her clothing being lost.
Basic Info
Name
Mura the Mink
Full Name
Murasaki Mink
Nicknames
Mura
Age
14
Gender
Female
Species
Moebian / American Mink

Mura the Mink was Disgustedorite's second primary Sonic OC, and the first that was originally made with the intent of being a Sonic OC. She is apparently moebian, and there's no telling what her Mobius Prime counterpart would be like. Wait...

Mura is a purple mink with blue eyes, a light face and underbelly, and magenta markings. Though originally depicted without clothes aside from a necklace, she wears a dress in later appearances. The design of the dress has unfortunately been lost. She has also occasionally been depicted wielding a sizable gun, specifically an AK-47. I have no clue why.

In her image, she is depicted without clothes aside from her necklace due to her outfit design being lost. However, I may have an idea of where I can find old sketches; a new image will be made if I do find them. The old image will be kept in such an event to show her markings.

Mura comes across as anxious with a tint of sadness. She is always looking over her shoulder as though she is being followed--and when she isn't, she is almost begging to be chased. She has not been seen outside this mental state in recorded media.

Nothing is known about Mura's early life or how she got into this situation. All that is really known is that, somewhere along the way, she got on someone's bad side and found herself being pursued by Anti-Shadow of all possible moebians.

Mura spent a lot of time living in the wilderness before she found what seemed like the perfect chance to escape--a portal to another universe. However, without the threat of being chased, she didn't know what to do with herself or what she was supposed to be. She ended up becoming weirdly attached to the Sonic of that universe, but her own anxiety built up until she had to leave to, at least in her mind, keep herself sane.

Mura briefly took up acting in indie films, but she didn't get very far. She ultimately decided it was best to just go out on her own in the wilderness once again, but this time in a universe where nobody was after her. It is unknown what happened after that because my interests shifted.

As a mink, Mura is a natural at swimming.

Mura has mastered the art of escape and hiding.

As one would expect from Mura's personality, she is extremely paranoid. She has a hard time trusting people.

Retrieved from "https://sonicfanon.fandom.com/wiki/Mura_the_Mink?oldid=1849657"
Community content is available under CC-BY-SA unless otherwise noted.