Start a Wiki
This is an article about Mr. Strings, a character created by Frozen Scorpio on 11/14/2014. 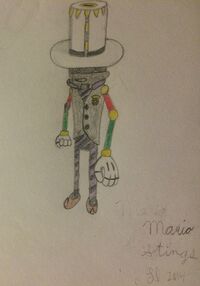 Mr. Strings appears to be a tall and really lanky humanoid Land-Crucite in the form of a puppet. His arms are segmented, ending in hands resembling cartoonish gloves. He dons a tall white top hat with what appear to be yellow spikes on the rim of the top and a long gray/yellow line going through the front. He also wears a dark-gray suit and black/lavender striped underclothing. His shoes are brown and arc backwards at the end.

Mr. Strings, at first glance, would seem to be a nice, caring individual who just wants people to enjoy his interdimensional carnival, but his true self is far different from that. As it turns out, he's actually a power-hungry madman with no care for others, even those who work for him. He seems to lack any true sense of empathy or trustworhtiness, and will simply play the part like the puppet that he is.

Mistr Strings was born on a new and prosperous Crucite-controlled planet, and reached the surface in what appeared to be a gap between a forest and a graveyard. He was cared for by a Crucite that was cursed and had portions of it's body turned into a tree and had become ruler of the forest beforehand. Mistr lived a happy life, and often studied and observed puppetry done by local necromancers in the graveyard nearby. As he grew up, Mistr would become more humanoid than most Crucites, and would tower over many others in his area.

At the proper age, Mistr left his homeland only to settle in the graveyards not too far away. There, he practiced necromancy with the many dead bodies available, but quickly grew tired and began to whittle puppets of multiple shapes and designs from trees on the outskirts of the forest. With these, he ended up creating many copies of things he would see passing through, but instead wooden and soulless, as he was always the one to control them. He often used this to scare people either for possessions or just for kicks. Then one day, he had fooled the wrong Crucites.

A herd of volcanic land-Crucites resembling buffalo would stampede through one day, and Mr. Strings had decided to use his best prank on them. He would assemble his many puppet-creations and attempted to spook the herd by surrounding them. This had proven to be very foolish, as, out of fear, the Volfalo herd responded by ferociously attacking Mr. Strings and his puppets, leaving it all in a destroyed, burning mess. Mr. Strings, with barely and energy left, managed to survive, but was badly wounded in the process. Heartbroken over his desecrated "masterpieces" as he liked to call them, Mr. Strings drag his heavily-damaged body back to his hut and, by use of an ancient spellbook, transfered his soul to one of his puppets, this being an exact duplicate of him except for several color differences, and his soul would be turned into a weird star-emblem on the chest.

After this, Mr. Strings tried to raise the dead once more to get revenge, but had found that everything he revived immediatly turned into wooden puppets, and he felt what little energy they had left flow into him. He  then tried this out on living creatures that passed through, and saw the same happen, only much slower and more difficult. One day, when trying to convert a massive cloud-scorpiel flying through, Mr. Strings somehow tore open a portal to an empty dimension and flung both himself and the scorpiel inside. In here, Mr. Strings felt a massive amount of strength burst within him, and the scorpiel was quickly overpowered and turned into a lifeless tree resembling it's body.

Mr. Strings decided to use this new world as a canvas to unleash his insane ideas. He used the space to create a carnival to attract more prey to him, and often appeared overnight right next to large crucite civilizations. This allowed him to fool and consume hundreds of other crucites, but his fun did not last for long. Shortly afterwards, Sirus was unleashed into this world, quickly overpowering other crucites and rising in strength much faster than Mr. Strings could ever dream of. He tried to trap Sirus in his dimension and let his vast amount of puppets do the work for him, but this ended in failure and left Mr. Strings in the same near-death state he was in before. Drained of almost all life and his army destroyed once more, Mr. Strings could only lie in defeat.

But then, a voice spoke to Mr. Strings from seemingly nowhere, promising him of great opportunity at a price. A dark hole opened up and drag Mr. Strings within, and brought him into the Void of Memory, where he would confront the Void Orb itself, which seemed to have gained consciousness and witnessed Mr. String's defeat. It restored him back to adequate strength and offered him great power if he worked for it, and tasked him with bringing more and more people into the void for it to assimilate.

Mr. Strings agreed to this, and, under the lead of the Void Orb, laid waste to civilizations all across the universe and practically multiply the orb's power. Eventually, the orb reached a point of instability and collapsed in on itself, nearly destroying the void and all that were contained within it. Mr. Strings, using the souls of all those he had brough in, rebuilt the world and create a new Void Orb, but fell into a deep hibernation as a result of losing so much power at such a quick moment.

Many millenia would pass, with Mr. Strings simply resting near the center of the void to slowly restore his energy. Eventually, a being of twisted dark energy named Sartorius Vhan fell into the void and merged with the Void Orb, unleashing a powerful wave of dark energy throughout the void, awakening Mr. Strings from his deep sleep. He looked upon what had happened to the world he had spent so much energy recreating and, out of rage, attempted to attack Sartorius, but was quickly defeated due tnot being at his full strength yet.

Vhan had found this amusing, and had decided to let Mr. Strings help him, by basically doing the exact same thing he had done once before for the orb. Mr. Strings accepted, now with a deep feeling of anger at Sartorius, but simply wait until the right moment to exact revenge. After many more years, Mr. Strings brought himself to near-full strength and revived his carnival dimension once more, this time in an area on the edge of the Void of Memory to avoid being noticed by either Sartorius or Xahlia. Through this, Mr. Strings brought many more people into his realm, and even gained a few recruits along the way.

Events of the EQuartz Committee: Season 1-2

Mr. Strings plays a largely minor role in the first two seasons of the show. Here, he simply shows up to a random town overnight, and establishes his carnival to steal away curious attendees to do who-knows-what to them. Every time this happens, a member of EQuartz (usually Willow) is there to stop his actions. He never directly shows his face and instead has Kyoyan fight them off unaided, lurking in the shadows to avoid being seen, building up the suspense as to what this being might look like.

What is probably Mr. Strings' greatest power is his ability to control people like string puppets. By use of magic strings that he shoots from his hands, Mr. Strings can attach to and control the body of up to several people, and can even use their connection to send waves of pain or even drain life from his victims. On top of that, he can also open portals to a bizarre carnival dimension, and those who enter slowly have their energy drained and turn into puppets after enough time passes. These puppets have no free will and void of any soul or life that the originals once had, now condemned to becoming part of Mr. String's ever-expanding collection.

With each puppetized person, Mr. Strings gains more strength and can even steal their knowledge and memories for himself. Another ability Mr. Strings has is that he can basically use his fingers like bullets and fire at opponents, with his fingers respawning at the cost of very minor energy-loss. Mr. Strings can also travel between his carnival dimension and reality, and can open portals to lure people into it.

Normal design
Add a photo to this gallery

Retrieved from "https://sonicfanon.fandom.com/wiki/Mr._Strings?oldid=1658926"
Community content is available under CC-BY-SA unless otherwise noted.