Start a Wiki
This is an article about Mortem, a character created by Battlelord7 on 05/5/2013.
Mortem The Vampire Prince 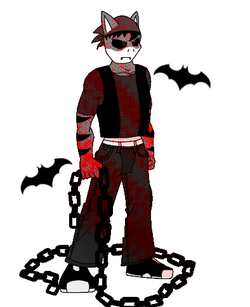 Mortem The Vampire Prince is a hero hailing from Dark City.

Mortem is a dark hero or so he percieves himself as. Despite being a vampire, he is not evil; through out most of his life as the new age for these stalkers of the night, Mortem has done nothing but give aid to the innocent. Perhaps he believes saving others will save his own soul, however, unknown to him is that there is no true redemption... not for one that craves blood.

After Eggman's bomb blew up Dark City, the residents among the debris evolved into the next generation. Mortem was an unlucky one and was gifted with a darkness, a symbol of evil that he cannot escape and yet he still keeps trying. That evil was himself.

Mortem has a unique ability to transform into a swarm of bats mixed with a puff of smoke, this helps him move quickly and more stealth like. And, like all vampires, he strives from one main resource: blood and lots of it.

Thanks to his powers as a Vrykolakas (greek word for vampire), he has skills based on the time of day. This makes him a tough opponent when in dark places.

Retrieved from "https://sonicfanon.fandom.com/wiki/Mortem_The_Vampire_Prince?oldid=1376608"
Community content is available under CC-BY-SA unless otherwise noted.