Monty the Dog is a character who appears in The Legend of Fox the Brave. He is a young dog born in Mountain Lake Village who was displaced from his home by Eggman's forces during the Great Rebellion. He eventually made it to Lamarkie Village, where he currently lives as the leader of the Lamarkie Defense Force. 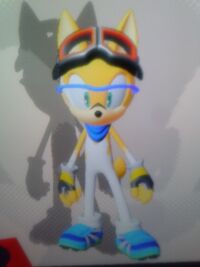 Previous Look: Monty has bright yellow fur with a white flame pattern, and blue-green eyes. He wears a blue neckerchief, blue-framed glasses, black goggles, blue shoes, and black fingerless gloves with a yellow stripe on them.

Current Design: Monty is a brown dog with both lighter and darker patches, a lighter belly, thick tail, and blue green eyes. He wears a blue neckerchief, dark blue glove with a bit of yellow and brown on them, and blue framed goggles.

Early on, Monty was a rather laid-back person, but as time went on, he became more serious. Currently, he is a bit guarded and a bit of a loner, but he is friendly and welcoming, if a bit wary

Monty was born to Thomas and Erin in Mountain Lake Village. However, the town was destroyed by Eggman's forces as the Great Rebellion was kicking into high gear. Because of this, Monty was forced to flee, and became an orphan. He sought shelter in Wolfhart City, but when that was attacked and destroyed, Monty fled to Lamarkie Village, where he set up his own team that eventually became apart of the Storming Alliance

Due to Monty prioritizing the rescue of young ones in the event of an attack, he is willing to put himself at risk, and villains such as Infinite might use this against him.

Monty's birthplace, Mountain Lake Village, is named after the city of Mountlake Terrace in Burpy's Dream's home state of Washington

Retrieved from "https://sonicfanon.fandom.com/wiki/Monty_the_Dog?oldid=1873515"
Community content is available under CC-BY-SA unless otherwise noted.