Start a Wiki
This is an article about Monty J. T. Vao, a fan-character created by Julia Finitevus!

"Monty" Montgomery J. T. Vao is a male Tenric-like Mobian born two thousand years after the events of the Genesis Series. This character was specifically created to be a bit of a comic relief for the series alongside Antonio Terrè. 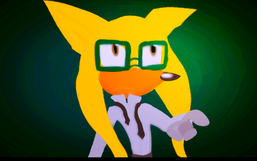 Monty is usually a very nervous person and not very confident in his abilities. Often times he is reassured by his friends, but he remains unsure about himself and his role as first officer of the Dark Flame. He usually finds himself confused by a number of situations and will often be blank as to what to do. Monty also expresses disgust when he sees people dating- usually saying, "It's a waste of time to pine for somebody twenty four seven." However, he himself has frequently been caught in a situation where he is in such a state (especially around Rhyna).

He continuously expresses disgust at some people's habits, especially that of Antonio Terrè's. Monty frequently gives Antonio lectures on his behaviour, but at one point confessed secretly to Rhyna that he actually liked Terrè's personality. Monty occasionally shows bursts of self-confidence, but this is usually followed by extreme low self-esteem when things go wrong. He is also prone to anger and will frequently fall into outbursts of rage.

Monty was born to unknown parents in New Portal sometime after the Great Disturbance. He lived most of his childhood and adolescence as a street orphan, often working now and then for free food and supplies. Eventually when he was nearly ten, he was taken in by an old female Hedgehog named Juliette Ren, owner of the Lestho Orphanage. Monty spent the next eight years at the orphanage and when Juliette passed away from a severe case of Alzheimer's, he was forced to leave the orphanage in search of a new home and a job.

Monty eventually used what money he had left to get education in hydrochloric power plants. At first after completing his education he had a job as a vice president of the New Portal Hydrochloric Power Plant. When his boss was mysteriously killed in a space shuttle accident, Monty took over as CEO of the plant. This somehow caused him to become abusive towards his employees and as a result was one of the worst CEO's of any power plant in the galaxy. However, within one year he was demoted to janitor due to his behaviour. This lowered his self-confidence significantly and left him terrified of taking the lead on almost anything.

Eventually Monty left the job as janitor and started working as a waiter at an Italian (or the Mobian variant) restaurant. This was cut short when he was framed for the murder of his old boss and was sentenced to execution. Monty was later rescued by Rhyna just when he was about to be hanged. He was interrogated at first when brought back to the Dark Flame, but then was integrated into the crew afterwards, eventually becoming first officer.

Monty currently has very few leadership skills, having lost most of them after being demoted to janitor when working at the hydrochloric power plant. However, he has shown great skill in using technology, especially in using computers and other devices that use software- but has limited skill in actually creating software programs. Monty also can repair most tools and devices. He has little to no skill in combat, but is still able to somewhat defend himself when necessary.

Monty's leadership skills are severely hindered by his inability to have self-confidence. This can often lead to him being more of a liability than an asset, since being first officer usually involves leadership skills. Monty also has little to no combat skill whatsoever, often putting himself and others in danger when in a combat situation.

"Ugh, is girls and beer all that the only thing you can think about?!"- Monty criticising someone who is dating

"Sheesh, who put mutton in his cereal?"- One of Monty's catchphrases

"My God, what are you doing?!"- Another catchphrase

"Mr. Terrè, please stop smooching that girl and get your butt over here! Captain Rhyna has to speak with you." -Monty disgusted by Antonio's habits

"Mister Antonio Terrè, either you do as I say or my name isn't Montgomery Joseph Tobias Vao!" - Monty extremely annoyed with Antonio

"Isn't she wonderful or what?" - Monty pining over Rhyna

Retrieved from "https://sonicfanon.fandom.com/wiki/Monty_J._T._Vao?oldid=1755469"
Community content is available under CC-BY-SA unless otherwise noted.