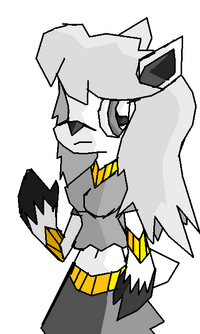 Monochrome also has a formal black dress she wears when she has to go to parties where she presents her dress designs off or when she has to do business with a company who wants to use her works.She often wears pearls with this dress.

At home,Monochrome wears a white tank-top and a pair of torn jeans.She refuses to wear shoes at home.

In public,Monochrome is a polite and sophisticated girl.She asks kind and is willing to take advice for her work.She pretty friendly and has to act the exact opposite of her true personality for her to gain customers and companies asking to use her clothing designs.

At home,however,she acts a lot different.She's lazy,gluttonous,and lustful and wears less fancy clothes.She's rude and violent and practices fighting incase she needs.She as well believes she has mental anguishes about how she acts and wishes never to return to her sophisticated ways,but knows she has to if she wants to sell clothes and get noticed.

Monchrome's real name is Avice Kimberlyn Shapcott and is one of five children of the Shapcott,a rich family.She was rude and immature growing up and thought she could weasel her way out of being one of the children having to do anything really important in the family.She liked to pick on her siblings,but wouldn't that much because they're family to her.She was picked on in school do to the way she was dressed,but she would bully them back physically.

This is when she discovered she was really good at fighting.Her parents disliked how she wanted to fight and was violent,so they prohibited her from fighting.This didn't stop her and she kept training in secret and went out in public to fight for money.Eventually she would go to highschool and discover her second talent,designing dresses.This contrasted her usual personality and she had to create a second personality and name for her to go out in public with.She was then known as "Monochrome".This attracted lots of attention from others and companies looking for her to work for them.She became something she despised the most.

She now works as a dress designer and less time to fight for money,though she still practices in secret from her parents.

"It was nice meeting you mister/ma'am."~Goodbye.

Monochrome can be hurt Physically or Mentally,but not Emotionally.

Monochrome can be hard-headed at times when fighting

Monochrome's only weapon is Metal Pipe

Retrieved from "https://sonicfanon.fandom.com/wiki/Monochrome_the_Sheep?oldid=1540134"
Community content is available under CC-BY-SA unless otherwise noted.