Darkest Shadow, the author of Monica the Fox, considers this page to be unfinished. As such, some sections may change.

Just get on the floor and glide your feet! Seriously, it's not hard! 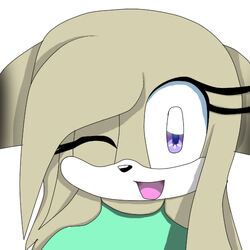 Monica the Fox is a character created by Darkest Shadow. She is a girl from Beach Cove who has a talent in all kinds of sports that involve skating, such as hockey, in-line skating, and trick-rollerblading.

Monica's original plan was for her to be an extreme tomboy. She had no interest in anything girly, and she always spoke in that low raspy voice. She was the only girl in her school who was into those kinds of skills.

However, as of 2015, Monica has grown a more feminine personality, taking a more slight interest in fashion and getting a little more girly. However, for the most part, she still retains her tomboyish personality that she has today.

Monica is a beige fox. Her appearance  makes her inner ears covered in fur. Her hair goes down to her hips. She has lavender eyes and a white muzzle. Her ears are big, puffy and are inked in black on the sides. She has two dots on her puffy tail.

Currently, she wears a pale turquoise crop top with long sleeves. She also wears white gloves with cuffs hidden in her shirt. Her tummy is indeed showing. She wears blue cut jeans with a pale light blue line. To complete her outfit, she wears pale light blue shoes.

Monica is best described as a tomboy. This may be because she loves to play hockey and try to hang out with boys. She is the only girl on the Varsity Ice Hockey team for the MCA Allstars. Her love of sports and determination got her into many boys teams.

Monica also has a more girly side. This is shown by the friends that she hangs out with and her constant energy to shop. She'd buy anything, because unlike most girls, she doesn't care about how she looks. Also, she admires when people call her cute.

Yet another core of her personality is her smart side. She always thinks twice before doing something and thinks about all of the positives and negatives. She is also pretty smart and has high grades.

Monica absolutely loves skating. She barely ever falls and moves swiftly and gracefully, yet careful and cautious about her balance. She could do anything skate related, such as:

She also is pretty creative and loves to build things. Sometimes, some of her projects malfunction though.

Retrieved from "https://sonicfanon.fandom.com/wiki/Monica_the_Fox?oldid=1747637"
Community content is available under CC-BY-SA unless otherwise noted.