Not to be confused with Monica The Hedgehog.

"Masako, say something, you're creeping me out here..."
—Monica DeLouise

Monica DeLouise is a Class SSS Assault Operator of OmegaCorp and is the Operator of Sigma Hale. She's one of the few known people in possession of a Nox Nyctores, and her life has become extremely dependent on it.

Monica DeLouise was born on the night of October 16, 1987 to a wealthy French couple, Markus and Frencezka DeLouise. Her early education was spent in prestigious boarding schools and (blah, blah, blah, blah...)

She spent a great deal of her childhood with a purple porcupine named Vinka, who had been her best friend throughout life. They did almost everything together; they went to the same classes together, went to the same parties, they even helped each other with homework and other things.

On her 16th birthday, Monica ran off to play in the fields near where the party was being held when she noticed one of her friends went missing. Monica went looking for her and accidentally tripped on something. She looked back to see what it was, and was horrified by the sight.

It was her friend's body. She'd been murdered.

Monica then found herself face-to-face with the monstrosity responsible for the murder. Up until now, she never once considered that the legends she had read about the Boundary or the Murakumo Units were true. And now, staring her in the eye was the eighteenth Unit, σ-18 -- or what was left of her, at least. Having been previously destroyed by Sigma a year before, σ-18 was banished to the Boundary and left to revive herself, driven by her will to destroy the Power of Order. In desperation, σ-18 clawed her way out of the Boundary to merge with the nearest compatible lifeform and make her body whole again. That lifeform just happened to be Monica. Her friend was incompatible for reasons that were not made clear to Monica until years later.

When Monica encountered the Murakumo Unit, she was still incomplete and was barely holding herself together. Seeing this, Monica thought she'd have a chance to run away. However, the second Monica turned around, one of the Murakumo's blades stabbed her in the chest, dragging her back. She screamed and prayed for someone to save her.

Someone did save her -- or rather, something.

The Nox Nyctores "Volō Ascensio: Siggautr" appeared in Monica's hands as she was dragged toward σ-18. Monica hadn't fired a gun in her life until now, but she had no other option. She desperately fired at the Murakumo Unit as she fought for her life, but it refused to go down. At the last moment, Monica landed a shot in the Murakumo Unit's head.

The body fell limp. Its armor and blades disappeared in a blue light, and the rest of the body simply faded away into nothing. Monica's adrenaline began to wear off after the period of mortal danger had passed. She collapsed seconds later due to exhaustion and blood loss.

The next day, she awoke to the sound of a heart monitor. She was in a hospital. After Monica regained consciousness and demonstrated she was capable of breathing without assistance, the doctors opened the room to visitors. As expected, her family and friends (minus one) went to her bedside. However, there was one visitor who was a complete stranger to her. They appeared to be an OmegaCorp representative... but why were they here? Something seemed off. She didn't suffer any fatal injuries, but if it caught OmegaCorp's attention, it typically meant that something else was wrong; something beyond the typical Mobian's comprehension.

In the next three years, Monica began getting memories of a life that she had no prior recollection of. Horrific memories of people and soldiers being slaughtered. Angry memories of being hunted like an animal. Lonely memories of a life spent in a pitch-black dimension, the only company being these light-blue orbs that simply come and go.

Memories that didn't belong to her.

It finally dawned on her what really happened when σ-18 was killed.

When Monica finally shot σ-18 in the head, it was already too late. She was already beginning to merge with the Murakumo Unit. Monica may have saved her own body when Siggautr lent her its power, but σ-18 was willing to go to any length to achieve her goals. That included forfeiting her own body to merge every part of her soul with Monica's. She was using Monica as a vessel to fulfill her ambitions. She may have lost her original body, but in time she would be able to crush Monica's soul and claim her body for herself. Now she was forcing her own memories into Monica's brain to try and break her, to chip away at her willpower and speed up the process.

Every time a memory from σ-18 was shoved into Monica's brain, however, it would be shoved out by another force. She could feel Siggautr's presence every time it happened. Now Monica had realized that Siggautr was the only thing keeping σ-18 at bay.

Monica knew that it wouldn't last forever. It would just keep happening again and again until she finally gave in. Then she would kill everyone close to her and she wouldn't be able to do a damn thing to stop herself; or stop her body, more like.

Out of fear for herself and everyone she held dear, she ran away to Takemikazuchi, an OmegaCorp-owned city and the location of the Operator Academy. The main curriculum of the academy's scholars dealt with the sort of phenomenon that was now ruling over Monica's life. She wanted answers... she wanted to feel safe again. She knew that every step towards the Academy was a step away from her normal life. She'd already determined that her life would never be normal again anyway.

She didn't even make it into the city before G.U.N. kidnapped her and tried to smuggle her on a transport away from the city. They were stopped by the brave efforts of a renowned Operator, an ocelot named Athena Pyress. As she offered her hand to Monica, the latter felt as if someone was finally looking out for her. Perhaps fate was willing her toward the Academy... and perhaps it was also responsible for bringing her and three friends together.

The first was a pink vixen named Masako Haruno, who sought her out almost immediately. They quickly became friends, though Monica claims that Masako tried to come onto her once. They took in two more students after: a snow leopard named Kasha Petrovski, and an olive green cat named Natalie Alister. The four girls were all in their first year, and they each made it a point that they would graduate together. Two years later, they graduated at the top of their class, and quickly worked their way up the ranks, becoming some of the best Operators in OmegaCorp today.

Monica lived a confident life from then onward, knowing that she has friends that she can rely on, and that they'll stand together even in the darkest of hours.

But she knows that her fight with σ-18 is far from over. She hopes that when and if the Murakumo Unit takes her life for her own that Masako, Natalie, and Kasha will be there to end it. 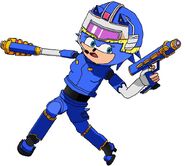 Old Photo.
Add a photo to this gallery

Retrieved from "https://sonicfanon.fandom.com/wiki/Monica_DeLouise?oldid=1853240"
Community content is available under CC-BY-SA unless otherwise noted.