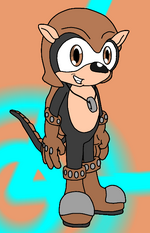 Silver magic ring on a necklace.
Relatives
No on-screen parents. Counts those close to him as family
Romantic Interest
No thanks I'm 14
Alignment
Ummmm lets go with "good"
Likes
Fighting, mudkips, milkshakes, and Manik Needlemouse
Dislikes
Mannik needlemouse
Skills/Abilities
Street fighting, momentum control.
Friends
Manik Needlemouse
Foes
Manik Needlemouse
Forms
BOOM!!!! Momentum
Momentum the Armadillo is a stubborn unstoppable and competent master street fighter. He won't give up even if he faced the most powerful being in the universe and is getting his ass kicked. his stories take place 100 years after the events of the game.

Edited by: Momentum the Armadillo!

When he younger would often fight (and lose) when ever he was confronted. Even if he was exhausted and bruised he always kept fighting. he was always quite an adventurer too.

Once he had learned basic fighting he left home and decided to look for treasure. on his adventures he met a nice couple of hedgehogs whom he soon became good friends with. They taught him basic tomb raiding skills and of many ancient legends.

He eventually came to an ancient temple with the legend of an ancient ring said to grant ancient powers of the ancient people who crafted it in ancient times... ancient. He obtained the ring but in doing so set off a trap launching a boulder down to crush him, unlike Indiana Jones he didn't make it to the door in time and it shut, but thanks to the mighty ring he halted the kinetic energy of the boulder and reflected it on the door blasting it open.

Recently he has met the son of his hedgehog friend named Manik Needlemouse. They became rivals as they are both stubborn and it makes a reason to see each other.

Momentum's main ability is given to him from the ring he wears on a necklace around his neck, it allows him to control kinetic energy in what ever he touches, or simply absorb the momentum and store it in an aura around him to be used later. He as well has his shell as all armadillo do but rarely utilizes it. He does not have super strength as Mighty does.

Momentum's main weakness would probably be his pigheadedness. He will never stop fighting unless he wins or is knocked unconscious (though his body will still flail and attempt to win)

He, although having great control over it, can lose the rings power if caught off guard which happens often. This has been exploited many times before by Manik and will probably continue to be.

Momentum is again very VERY stubborn and somewhat cocky. He won't admit defeat or flaws and often refers himself to be Invincible and Unstoppable (although very far from being it). However he will not take verbal arguments, intellectual or other wise, very seriously and would rather do without them. He's trust worthy and reliable but will often take credit for winning a fight he needed his friends help for. He as well can't help getting into a fight especially if fighting is the opposite of what situation calls for.

BOOM!!!! Momentum: Momentum can go boom when he gathers a LOT of momentum within his rings aura. When he has banked enough he will make a less than witty remark and then scream "BOOM!!!!!" as he lands the first blow of the transformation.

Retrieved from "https://sonicfanon.fandom.com/wiki/Momentum_the_Armadillo?oldid=1820132"
Community content is available under CC-BY-SA unless otherwise noted.