Start a Wiki
Mojo the Monkey 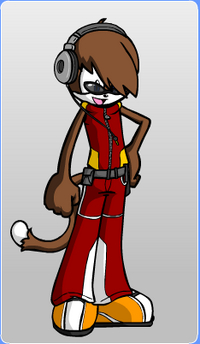 Mojo the Monkey is a young, male monkey and the power member of Team Blackout. He is one of the first OC's created by FierceFlame9001 for Untitled.

Mojo the Monkey was born as Michael the Monkey to parents Jacob and Mavis the Monkey in a remote jungle area in Pann. His birth was closely followed by those of his siblings, Mitchell, Michele and Maple the Monkey. Soon after the birth of Maple, Michael's parents, both carpenters, contracted Woodcutter's Disease and died soon after, leaving Michael to raise the family himself at the age of nine. Michael and his family then became scavengers, stealing food and water to survive. Michael did whatever he could to stay positive, even asking his siblings to call him Mojo because it made them laugh. Mojo and his family lived like this for nine years, until Mitchell, Michele and Maple were able to take care of themselves. The three were extremely greatful for him acting as a father figure when they had none, got jobs as merchants and agreed to give part of their monthly pay to Mojo, leaving him to explore the world on his own.

Almost immeadiatly, Mojo left Pann on a train arriving in Kalis. Mojo loved seeing the brighter parts of Kalis, but it wasn't long before he winded up in the poorer parts. Mojo, determined that no one else grow up like he did, decieded to try to aid those in poverty, starting with Kalis. He started to steal from the rich and give to the poor, much like he had done for his siblings. This thievery eventually attracted the attention of Wild the Skunk, an intellectual and son of multi-millionaries. The two soon became best friends and formed Team Blackout, a team dedicated to helping those who cannot help themselves.

Mojo is a very caring and selfless person, often trying his hardest to make other's lives easier. He also has a habit of joking around a lot and not being too serious, which is very nice normally but is one of his weaknesses when the situation is very serious. Mojo is also very proctective of people, and is willing to sacrifice even his life for someone he might not even know.

Strength - Mojo, being the strength member of Team Blackout, is very strong. He capeable of lifting objects up to 100 times his own body weight.

Stealth' -' Mojo has a lot of experience stealing things, and is a very accomplished thief.

Survival - Having lived on the streets most of his life, Mojo has learned to survive many day with little to no food or water and still be able to function normally.

When exposed to the Red Emerald of the Infinity Emeralds, Mojo fuses with Terminus, the spirit of the Red Emerald, and becomes Michael of Strength. Unlike his fellow Infinity Emerald users, Mojo almost never co-operates with his Emerald Spirit due to Terminus' tendencies to sacrifice his fellow teammates to defeat opponents and to kill opponents rather than incapacitate them. This means that in most battles, Mojo is fighting opponents as well as mentally subdueing Terminus. Because of this, Mojo can not stay in this form for an extended period of time.

While in this form, Michael's abilties include super strength, weapon generation, fire generation and invunerability.

Retrieved from "https://sonicfanon.fandom.com/wiki/Mojo_the_Monkey?oldid=1473116"
Community content is available under CC-BY-SA unless otherwise noted.