Whatever. I mean, I don't have anything better to do. 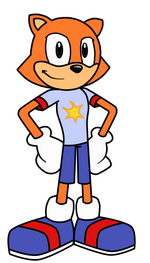 Moe Flippercorn is an original, Princeton Orange, anthropomorphic Nebelung Cat created by pumpituppartyzone. He has only made one apprearance in anything public (even though it is just a Happy Birthday picture to another user). He is 107m tall and weighs 38 kg. He is dating Petunia the Porcupine and loves art.

Moe was created some time in 2005 from a toontown design. He was originally supposed to be 18, however. Also, he was very tough and had scruffy-looking hair. He always had a creepy smile, and would take on any challenge. He was extremely powerful, but not very fast at all. Then, he was supposed to be killed in the woods, and nobody could figure out who it was. However, 3 weeks later, pumpituppartyzone decided not to kill off Moe, and his personality was changed completley.

Moe is a usually nice person, caring for others deeply and wanting the best for everybody. Despite his good nature, the tends to have a sarcastic attitude about him. He is very witty and comes up with sarcastic remarks about most everything, which anybody in his family could confirm. However, Moe is only confortable saying them aloud to people he is close to. He is very shy and does not like change at all.

His shyness is the main reason that he is usually at home. He does not like to socialize or mingle, because as he said himself, it makes him feel awkward and he doesn't ever know what to say. To make up for the time he does not use hanging out with others, he spends most of his days in his house painting or sculpting.

Moe seems to have a quality about him that children love, as they always go crazy for him and like to be around him. He claims to be fine with it, but generally looks bored or annoyed whenever children play with him.

Because Moe is a power type character along with a treasure hunter, Moe has very useful abilities. However, he doesn't have many different attacks, so his attacks may be easily read. He throws very fast punches and scratches, due to his agility of being a cat. Moe is also a skilled artist, which helps make him good at building things.

He has a lot of art related attacks, such as the Paint Tornado, Pencil Bomb, and Pastel Hurricane, which are idealy damaging. Moe can heal people with his chao, Saturn, which quickly renews their stamina. He recieved a paint-powered jetpack for his birthday from Max, which lets him glide through the air.

Moe is a member of the "Flippercorn All-stars" in this game. He is also a power type.

In this game, Moe is a non-playable character. He is found at Paparazzi Square and is accused of stealing Lumina's digital camera.

Maxie and Max are sibling, but they usually do not talk to eachother. This is because Moe usually does not talk unless spoken to, and Maxie can never think of anything to talk to him about.

Max and Moe are very good friends. When Sharky is busy with his seafood shop, Max always hangs out with Moe, whether it is for or against his will. Max buys a lot of stuff for Moe, though they usually end up injuring Moe. 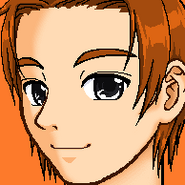 Moe in anime from. Made at at http://foxrichards.d

Moe's previous design
Add a photo to this gallery

Retrieved from "https://sonicfanon.fandom.com/wiki/Moe_Flippercorn?oldid=1780716"
Community content is available under CC-BY-SA unless otherwise noted.