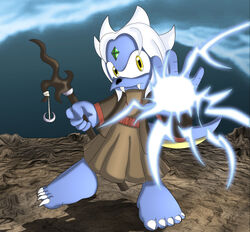 Thousands of years ago, there roamed lots of spirits created by the earth to serve as its guardians. Within our totems, we use the powers of those spirits to protect those we care about.

— Modeo, explaining to Cream the ways of Shamans.

Modeo the Dragon, Apprentice Shaman. Modeo was born into the Dragon clan, who's entire life are used learning and developing different magical styles. As Modeo turned 7, he was taught by one of the villiage elders, Teleia, the ways of being a shaman. Although he's only an apprentice, he had enough skill to use all four elemental totems, but he had difficulties at first, mainly that the fire spirits were too stubborn to accept the partnership of a child, and that the earth spirits were disgusted that they were not used efficiently. However, as time passed, Modeo learnt to control both elemental spirits.

Modeo is a carefree and joyous child, often seen playing or frollicking through the fields of Manatide. Although he spends a lot of his time enjoying his time with his friends, Modeo does not neglect his training and, unlike most of the other apprentices, finds enjoyment in it, always aiming to be the best of the Shamans and, as the cherry on top, to develope a new branch of Magic, just as Amatirion was the sole Paladin of the Dragon clan by intricatly manipulating the Light in glorious ways. However, because he is still a young person and that no other Dragon was able to derive their own form of Magic, many of the elders shun Modeo's dream aside, but still wish him the best of luck.

However, Modeo often has his childish side, sometimes playing with his totems, much to the dismay of the fire spirits, although the wind and water spirits find it both adorable and expected. Modeo enjoys sharing his cmpassion with others, often hugging them and comforting them, although some people's irritation at Modeo's pestering remains oblivious to him, though it is his naivety that seems to attract the cheerfulness from others. One of Modeo's fears is being tickled; even though he is scared of being tickled, he finds the sensation enjoyable and fun and often tries to cover up his more sensitive areas with his hands or clothing, despite the fact that he enjoys it, especially around the sides, neck and feet.

Modeo is not as diverse as most other shamans, only being able to utilize the more basic of Shaman abilities, although he has reached a point that he can advance in rank, but cannot do so due to the fact that he has yet to earn the utmost trust of his elemental spirits. The list of his techniques include;

Retrieved from "https://sonicfanon.fandom.com/wiki/Modeo_the_Dragon?oldid=1800552"
Community content is available under CC-BY-SA unless otherwise noted.