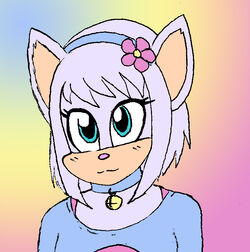 Mochi is a white cat with a purple hue. Her eyes are pale and blue, and her nose is pink. She stands at exactly 3', and has a relatively average build. Like a majority of white cats with blue eyes- Mochi is deaf. She often wears softer colors, such as pastels. She has a bell that she wears around her neck.

Mochi is an ambitious individual with a passion for science and making the world a better place. She is an extremely diligent student- sometimes to the point of ignoring others, her surroundings, or her own needs. Mochi's on the introverted side, and would prefer a good book over dealing with most social situations.  She gets frustrated if she has difficulty communicating with someone.She loves new things and wants to see technology progress even further. Mochi also has a keen eye for detail. She's a huge dork over robots, aliens, and other dimensions.

Mochi was born into a well-known family in Alpha, consisting of many brilliant scientists and eventually a future war-hero. Mochi, like many of her family members, showed signs of brightness from a young age. Despite requiring some assistance in school, Mochi passed her classes with flying colors, managing to skip a few grades- which isn't uncommon for children in Alpha. She graduated at about fifteen years of age and moved on to attend the University of Alpha. She graduated and is now a neurosurgeon.

Mochi can currently heal minor wounds such as cuts and scrapes. These powers can also help hold off a seriously injured individual for a few minutes, allowing more time for the individual to be saved. She has been lately trying to train her powers in attempt to make them more effective.

Mochi has pretty sharp vision, even in the dark. She has a keen eye for details, too. Mochi is also very intelligent.

Mochi has quite a bit of medical training, what with having graduated medical school and whatnot. She also knows cybernetics and how to repair them, and can perform basic repairs on robots.

Holoscreen- a miniature computer system used by many residents of Alpha. Mochi has installed a speech-to-text application that allows her to read what someone is saying to her. It doesn't work very well if more than one person is talking at the same time. Holoscreens can also be used to access information very quickly.

Crowbar- Mochi's weapon of choice if cornered. For such a tiny thing she packs quite a punch!

Mochi is deaf- it can be very easy to catch her off-guard. She's also not combat trained, and thus cannot currently defend herself effectively. Mochi's also not the most athletic and cannot run very fast or lift overly heavy objects.

Retrieved from "https://sonicfanon.fandom.com/wiki/Mochi?oldid=1859857"
Community content is available under CC-BY-SA unless otherwise noted.