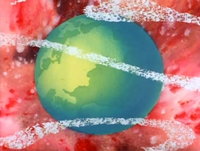 Mobius is the name given to the world Sonic and friends live in.

Mobius is home to humans and anthropomorphic animals alike, with the latter being a bit more commonplace than the former. There are more kids than adults, but that's because the kids who grew into adults had kids themselves. Plants grow aplenty in Mobius, such as Mobisia Marvellosa Marigoldias.

The climate is what'd you expect of an Earth-like planet. It snows in the winter, rains in the spring, etc.

Mobius was initially an Earth-like planet discovered by NACA in the 1920s. At the time, nobody thought much of colonizing it, since it didn't have as much resources as Earth. There were only a few animals living on the planet at the time, and their biology was different from Earth animals. However, a few years after Mobius' discovery, the effects of a nuclear reaction within the planet's core caused the normal animals living there to gain human properties, and they were the pioneers of what'd become Mobius. The non-anthropomorphic animals became woodland creatures. In 1981, a newborn Sonic the Hedgehog moved to Station Square, a borough in Central City. He'd grow up to become the defender of Mobius.

Even though NACA sent humans (including the grandparents of Madonna) to Mobius after the animals developed human traits, Mobians wouldn't come to Earth until the early 2000s, when the United Nations signed a treaty with Mobius that allowed Mobians to settle on Earth.

Sonic the Hedgehog, as noted before, lives on this planet. So do his friends Tails the Fox, Amy Rose, Johnny Lightfoot, and many more. Echidnas, rabbits, foxes, lizards, and humans live on Mobius.

Retrieved from "https://sonicfanon.fandom.com/wiki/Mobius/Mobius_Redrawn?oldid=1868174"
Community content is available under CC-BY-SA unless otherwise noted.