Members of the MDL hail from all walks of Mobian and Solian life. They're known to be as average as the common Mobian citizen looking to make a difference to the most powerful and gifted of meta-Mobian. The MDL is very liberal in it's recruitment drives and will find a specific job position useful to a specific Mobians capablities within the organization.

The Mobian Defense League is at its very essence a Defensive military used to protect Mobians and both Mobius and the SOL kingdom.The Mobian Defense League maintains a policy of neutrality with GUN and other humans Its goal is peacekeeping and not war, yet the MDL can become aggressive if provoked, especially in opposition to the growing Egg Empire threat, as well as the Eternal Army uprising.

Religion is allowed to be seen within the ranks of many an MDL solider as it is a cooperation of many Mobian cultures, species, and civilizations. Some notable denominations of religion found within the ranks of the MDL are those who worship Derr, god of Knowledge and Serenity, Goddess of Hope. Religious funerals of various religious communities are even allowed to give a proper and specific burial and funeral to the brave me and women who serve in the MDL.

While the official colors of the MDL appears to be blue, gold, and perhaps yellow as a substitute to gold many of the organizations, kingdoms, and uniforms of the warriors that serve in the Kingdom of Acorn and the SOL kingdom are allowed to be worn as well. While body armor, helmets, and combat boots with gloves is provided to the average MDL soldier it is known that various freedom fighters have been known to be amongst their ranks on occasions and work independently in terms of dress code.

"Eurish shall not fall." -the standard battle cry of the MDL soldier.

The MDL gets funding from two of the most prominent kingdoms on both SOL and Mobius, therefore the Mobian Defense League is well supplied and has an research and design team of several scientists and engineers. The MDL utilizes  in non-lethal weaponry and anti-robotic weaponry. That is not to say it is not without heavy firepower or vehicles. Known technology and weaponry include, but are not limited to: 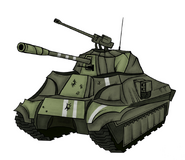 Retrieved from "https://sonicfanon.fandom.com/wiki/Mobian_Defense_League_(Flawed_Deites_version)?oldid=1798756"
Community content is available under CC-BY-SA unless otherwise noted.