Miyuki Akuroma (アクロマミユキ) is a small, young female fox from Crisis City, 200 years into the future. 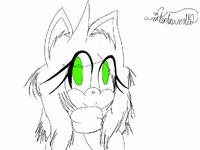 Singing (to a degree)

Her older brother
Dislikes
People who push and shove her around

People who are rather snooty/narcissistic

Singing (to a degree)

Miyuki appears with short, light brown hair with a soft blonde streak in the front. She has light grey ears and tail, and big bright pales eyes. She looks younger than she is. Her casual outfit consists of a pale pink shawl over a white dress, a pale pink bow tied around her waist, with white thigh high socks with pale pink rims and white boots with pale pink heels. Her fighting outfit consists of a black turtleneck and a black skirt with black tights under, and simple ankle boots, black knee socks finishing it off. All of these outfits have fingerless gloves, white in casual, black in fighting.

Sweet, shy, kind, gentle, quiet, introverted, she appears to be your perfect girl. However, under this facade of sweetness is a naive, short tempered girl who is incapable of being alone. Miyuki can be very passive-agressive, but she will attack when needed, and chooses when to attack and where with ultimate control and strategy. This causes her to be very dangerous when being fought. However, if your her friend, or close to her, then she is a sweet, kind person, and this is due to the fact she knows who you are, and that you wont hurt her, or her feelings. She's very dependent on people, but she desperately tries not to be. She's far on the smart side, able to calculate very hard math, science and computer like programs in her head,making her an excellent hacker, and she often uses this to learn more about her enemies or opponents. She also seems to have a soft spot for cute things. She can also come out as somewhat bossy, as of such, often somewhat rude aswell.

A time traveler from Crisis City, Miyuki considered herself useless for having Cyrokinesis, as it was not helpful against Iblis. After training her abilities, she found out she was able to use Chronokinesis, though it was very weak and minor, thus proving more useless. She had an older brother, named Hanako, however, he died protecting her in a large fight between them, and Iblis. This caused the once bubbly, happy girl to become quiet, dark, and somewhat rude.

As the Princess' Maid

(please note that this comes from a roleplay forum I am on so I will refrain from using any FC names to avoid being yelled at, as these people have become my bros. However, I will use the offical characters names as technically they don't own them. Also, this entire forum is based off the comics!)

Miyuki made her appearance as a maid for the Princess of Mobius' capital, Mobotropolis. Sonic the Hedgehog had been thrown into the dungeon after trash talking the princess, and was now the center of attention to both the outsiders, and the workers in the castle. The princess meets her loyal guard and has the pair have a talk, Sonic the Hedgehog escapes with his *future* daughter, whom which he does not know the real identity of. A young, child like maid approached the pair, informing them of the escape with a sweet, calm smile, that had no signs of being forced. After this a loud bang offically signing the escape she stops herself laughing and leaves the castle for a bit. Upon returning to her post as a maid, she is in the Princess' carriage as the Princess did a round around Mobotropolis.

Whilst doing the round around the city, the Princess comes across a man, who is later discovered to be the only one awakened, and the prince, of a city that was lost 600 years ago. He seems to think that the Chaos Emeralds are his only hope. Piping up from her spot, the child like maid makes her appearance again, stating that the Emeralds are carried by Sonic the Hedgehog and make him go super. The Prince unfortuantely doesn't understand a word of what she just says, thinking it's just slang. After the Princess tells him in a way he'd understand, Miyuki states that she would take him to the Royal Library, as there is books in there that would most likely have information on the Chaos Emeralds. After the pair leave for the Library, the Princess has a breakdown.

The Prince and the Time Travelling Maid: Find those Chaos Emeralds!

As the Prince and Miyuki walked through the library and discussed the emeralds she led him to a secret room. A room that she reconised from her own timeline, except, not destroyed. However, after accidently speaking out loud about her timeline in front of this dragon, she immediately changed her personality, going from the honey sweet, polite maid to a dark, rude girl who wouldn't take someone questioning her for an answer. After lowering the temperature, telling him to be quiet, and getting into a fight on whether she was wrong or not, the pair came to an agreement and started over, finding the book he needed with some help from eachother. The pair both agreed to not speak of this, and she left her job as a maid and the two parted ways.

Miyuki and Silver find themselves somehow teleported onto a large, metal ship by none other than Robotnik himself, and pushed through many trials. A cyborg rabbit girl attacking them, putting her out of her misery, the cyborgs Video Diary causing Miyuki, the one who made her eternally 'sleep', to breakdown. After a robotic dog of sorts attacking Silver, the dog went to Miyuki, who was broken down on the floor, caught in a rift of thoughts. The dogs pride wouldn't let him attack someone defenseless, so she immediately smiled, and with a sweet voice, put him down. Later meeting up with some soldiers from the army and none other than Sonic the Hedgehog himself and a secret king of a far away land, the group were the last to destroy a generator. Though a sacrifice was made. Miyuki, due to reacting to a liquid metal on the secret king's sword, jumped on the generator, and was immediately caught into a Roboticizer, and was turned into a Robot.

Meeting the Mother of Technology

The new Robian Miyuki was now walking through a park when she bumped into a Robo-Chao, who agreed to take her to his technology loving Mother, who Miyuki hoped would help her. After a few small things happening, she eventually was taken by this Chao to see his 'Father', who would help her.

The College Professor and a Robian Time Traveler

The Robo Chao took Miyuki to a college, where his father was. After meeting the Professor, and explaining her situation, time travel and all, he decided to let her stay with him until she found a place to stay.

Silver the Hedgehog: The pair are from the same time and grew up together, and rely on eachother for emotional support to get through their timeline. The two are together in Mobotropolis at the moment where they're trying to find out the cause of ruin in their time.

Fuyo Jubilee: A young man she met while out shopping, the clean freak and her became friends after helping eachother in the shopping centre.

Mana Hibiki: The blonde cat and Miyuki met through Fuyo, as Mana is like Fuyo's little sister. The two are close, but not as close as Miyuki is with Fuyo and Silver.

"To follow the fat man...or to not....that is what I ask you.." The newly robot Miyuki asking Sonic whether she should remain a free person or to follow Robotnik.

"Listen to me closely, Prince," To the Prince from 600 years before Mobotropolis, telling him to not question her.

Retrieved from "https://sonicfanon.fandom.com/wiki/Miyuki_Akuroma?oldid=1542507"
Community content is available under CC-BY-SA unless otherwise noted.