Memories are the true villainy of the the world. They're either forgotten making fact recall impossible or they plague your mind for all eternity

Misteria is a very aggressive and hostile character when she first interacts with new characters due to severe bullying as a child for having demon blood. Once she views a character as trustworthy, she opens up to them and lets her true personality show.

Misteria can be very hyperactive, especially when she was a child, and is very playfully aggressive with others. She enjoys roughhousing with others.

Despite not showing it on the outside, Misteria is very weak mentally and doesn't let too many people close to her as a result.

Misteria was born in Magis City alongside her twin brother Nathaniel to Lord Ali Crvent-Vuk and Alacia Gracie in the middle of Aquline's civil war.

Still being re-written so this section will be updated regularly

Misteria has the kinetic control of electricity (AKA Electrokinesis) which allows her to create small balls of electricity in her palms though she rarely uses it. Instead, she uses her kinesis to help her in engineering to test out circuitry in robots.

Due to having demon blood, Misteria is able to access a demon transformation that turns all of her dark grey markings and her eyes bright yellow. This transformation comes at a price as it saps at her energy quickly and removes some of her self-restraint as a result.

She also has uncontrollable bursts of vision of one's past, whether it is her own or someone else's. These visions cause her severe pain and so she is often known to scream out in pain when they begin. 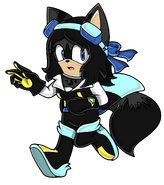 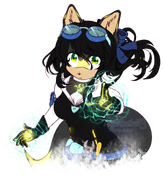 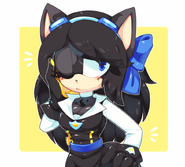 Misteria and her husband Byron
Add a photo to this gallery
Retrieved from "https://sonicfanon.fandom.com/wiki/Misteria_Crvent-Vuk?oldid=1769083"
Community content is available under CC-BY-SA unless otherwise noted.