The author of Mint the Bunny considers this page to be unfinished. As such, some sections may change. 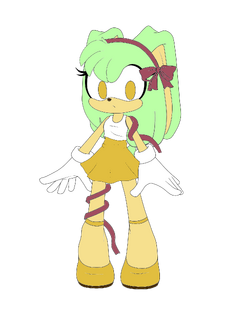 Mint the Bunny is an anthropomorphic 12-year-old bunny rabbit that lives on Arcadia Island. She runs a marketplace tent in the village and sells various mint-affiliated items.

Mint is a humanoid bunny rabbit standing at 3'1" and weighs 62 pounds. She has mint green fur, peach skin, a small black nose, medium sized bunny ears and goldish-brown eyes with two eyelashes each. Mint's tail is short and fluffy, half mint green and half white. She has an uneven bob hairstyle that reaches about her back, and a very fluffy bang in the front of her head.

Mint is usually seen wearing her sleeveless, golden brown dress with a short, white top layer that reaches about her knees. Instead of being baggy, her white gloves are neatly cuffed. Her shoes are the same golden brown as her dress, with small heels in the back of them. On her head, Mint wears a dark violet-red headband with a bow attached onto it. She wraps ribbons of the same color on her left arm and right leg to express her love for ribbons.

Mint is not much of a social person, and spends a lot of her time alone. She doesn't think of herself as a hero, but loves to watch when Nikki and her team are taking on Chrome's robots and winning. She loves giving gifts to others, though she is a bit shy at first. Mint likes making friends instead of enemies, and seeing others happy makes her happy. When others are out and about, she likes to sit back and smile.

Retrieved from "https://sonicfanon.fandom.com/wiki/Mint_the_Bunny?oldid=1800929"
Community content is available under CC-BY-SA unless otherwise noted.