Start a Wiki
This is an article about Mina the Mongoose, a character created by Konnichiku on 03/7/2015. 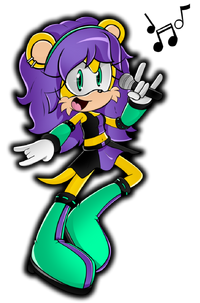 Mina the Mongoose is a teenage mongoose singer who is friends with Amy Rose and Sally Acorn.

Mina has yellow fur and purple hair. She has green eyes and a tan muzzle. She wears black arm socks with green stripes on them, white gloves, and green-and-purple boots. She wears a black tank-top with a purple stripe in the middle with a matching skirt. This outfit is interchangeable with an all black tank-top and brown shorts. She wears a green headband and silver earrings.

Mina is generous, forgiving, and spunky. She can be stubborn at times, but is always faithful and heeds her friends' instructions. She is bright and bubbly and is willing to help a friend out. She's a bit timid and nervous to do things at first, but she does them if she knows it's right. She's also a fan of scary movies and pretty excitable.

Mina was born in Central City. She grew up there, making friends and discovering her talents. At the age of eleven, she was discovered by talent scouts and eventually became a child star. However, Mina was unsure about her newfound success and decided to take a break from show business. Sometime later, when she was fifteen, Mina met Amy Rose and Sally Acorn. They found out that they have a lot in common and made friends. Soon, Mina taught Amy and Sally to sing, and after they moved to Earth in 2008, they decided to start a band, thus forming ASM. They signed a deal with a major record label, and they began touring and appearing everywhere. Now Mina is well-known throughout Earth, Mobius, and beyond.

Retrieved from "https://sonicfanon.fandom.com/wiki/Mina_Mongoose/Mobius_Redrawn?oldid=1868178"
Community content is available under CC-BY-SA unless otherwise noted.