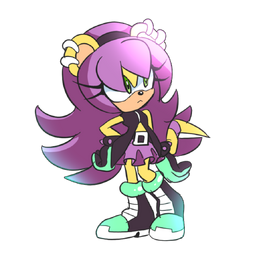 Mina Mongoose (also dubbed Songoose because of her singing talents) is a character who appears in the Marshalia13 Universe. She is a female mongoose and is one of Mobius' biggest celebrities.

Mina is generous and forgiving, and a little spunky. She can be stubborn at times, but is always faithful and heeds anyone's instructions. She is bright and bubbly and is willing to help a friend out. She also adores all of her fans, especially through her interactions with Marsha.

Mina was born to Arthur and Isabella Mongoose in Mobotropolis prior to Dr. Eggman's coup. Her father was killed during the coup while her mother was taken captive and was forced to become an Egg Soldier. When she became a teenager, she was encouraged by Rosie Woodchuck to begin a music career. This eventually lead to her meeting Honey the Cat, who got her clothes for her first stage show. She would eventually becomes one of Mobius' biggest celebrities.

Mina's most prominent ability is her singing talent. She has fans all over Mobius who are often inspired by her singing. She's a faster runner than the average Mobian, a skill that stems from the fact she's a mongoose, a naturally fast creature. While she doesn't quite match up to Sonic or Tails in terms of speed, she is fast enough to require training from Sonic to keep from seriously injuring herself whilst sprinting. Mina has also demonstrated that she can be quite good with kids.

Retrieved from "https://sonicfanon.fandom.com/wiki/Mina_Mongoose/Marshalia13%27s_Universe?oldid=1786733"
Community content is available under CC-BY-SA unless otherwise noted.