THIS PAGE IS GOING UNDER A MASSIVE REHAUL. I WILL HAVE IT COMPLETED ASAP. ~Frost

The author of Mimic the Mockingbird considers this page to be unfinished. As such, some sections may change. 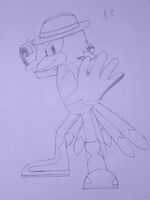 Mimic is a black and green mockingbird with a gray beak and green eyes. He has seven tail feathers, each of which are green at the tip. He also has a green marking on his chest. His attire consists of a black and green fedora (which he always wears no matter what), and a pair of green and black shoes. His gloves are primarily white, but there is a silver line running along the side of the outer hand on each glove from the wrist to the tip of the little finger. The cuffs of the gloves are black on the underside and green on the top.

(More details when the picture is finished!)

Mimic has a very deceptive personality that can draw attention away from many of his true talents. He often puts on a show of being an arrogant and smart-alecky individual who enjoys humor at other people's expense. In addition, he has a tendency to use sarcasm and take even serious situations quite lightly. This has given him the reputation and appearance of being an idiot to those who do not either like him or know him very well. In reality, however, he is incredibly sly, crafty, and clever. While his personality has a tendency to get him into a lot of trouble, his resourcefulness and cleverness has helped him get out of any predicament he may have gotten himself into. He is also very perceptive, being able to take into account details about his surroundings that other people would generally ignore or miss.

Mimic is a kleptomaniac, meaning he is a compulsive thief who will steal even if there is no real reason to do so. This has undoubtedly gotten him into a lot of trouble throughout his life. Fortunately for him, Mimic has become an exceptional thief who can often steal someone blind before they realize that they have been stolen from. For some odd reason, Mimic will often return the items he has stolen in the same manner that he stole them in the first place: undetected. Some speculate that Mimic could feel some remorse for his thieving and returns the object to sooth his conscious. More likely, however, Mimic just likes the thrill of a challenge and will return the item(s) he stole usually because he had no use for them in the first place.

He will typically come up with a nickname for nearly anyone he meets more than once. Sometimes these nicknames are clever, while other times they are purposefully corny or make absolutely no sense at all. He claims that it is his way of helping him remember people. However, that's not to say that he will never use a person's real name. The only times he uses a person's actual name is when he is serious about something.

Mimic has the ability to shapeshift. He can take on the appearance of anyone or anything he wishes. His ability can even fool electronic identification equipment into believing he is the person that he is trying to impersonate. All Mimic has to do in order to shapeshift is concentrate on what he wants to turn into, and his body will morph into that object. Not only can he take on the apperance of the person or object he is impersonating, but he will even copy the physical properties of what he is impersonating. For example, shapeshifting into a stone statue will make Mimic as hard and durable as stone.

Mimic's shapeshifting ability is not limited to only impersonation. He can also change his body's physical makeup in a variety of ways, such as stretching his limbs over a great distance, greatly increasing or decreasing the size of a body part, or even changing his body's cellular makeup so that it is made of another material. He can also turn individual limbs into almost any other object he wishes. This additional use of his shapeshifting has often come in handy both in and out of combat, but Mimic will most commonly use it for either comical purposes or a quick change of attire.An example of the former would be that he will sometimes turn his head into an oversized lightbulb whenever he gets an idea, while an example of the later would be that he can spontaneously form a winter coat to wear.

However, Mimic's shapeshifting ability does have its limits. While he can impersonate another person so well as to fool electronic identification equipment, he cannot copy another person's powers or skills. This is one of the few ways to see through Mimic's masquerade. However, Mimic can copy certain abilities. For example, if the person he is impersonating has wings, Mimic can use those wings to fly, though he would likely be very clumsy at using the new appendages at first.

Mimic has the natural ability to alter his voice however he wishes. This makes him very good at doing impersonations of other people. Mimic can mimic the voice and speech pattern of another person so well that even audio devices and people can be fooled into thinking that the voice belongs to the person Mimic is impersonating. This natural talent goes perfectly with Mimic's shapeshifting ability. In addition, Mimic can imitate hundreds of different types of sounds. Like with his impersonations, Mimic's ability to imitate sounds is so good that it is virtually indistinguishable from the real thing.

Mimic is also suprisingly athletic and agile. He can perform wall jumps, climb walls and railings using anything he can grab on to, and run up walls and perform a backflip off of them.

Mimic is resourceful and can use almost anything in his enviroment to his advantage. He often uses items like firecrackers, poppers, marbles, and smoke bombs to help him fight or escape.

Mimic has adequate hand-to-hand combat skills but will often use his smoke bombs and firecrackers to help disorient opponents, giving him an advantage.

He's also been known to get his hands on high grade equipement like warp rings and tranquilizer guns, giving the impression that he has connections.

In addition to dancing, Mimic is an amazing singer (since he can change his voice to sound like anyone else's).

Start a Discussion Discussions about Mimic the Mockingbird