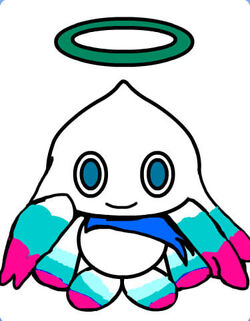 Milkshake the Chao is a character created by Darkest Shadow. She is a female hero chao belonging to Alyssa the Dog. Being raised by Alyssa, she loves to listen to music and dancing.

Milkshake currently stands at 1'6 and weighs about 18 lbs. Unlike most hero chao, her eyes appear to be normal like a neutral chao. Her halo above her head is a teal color.

She has "hair" that not a lot of chao have. Her arms are sort of like flippers to swim. She wears a stylish blue scarf that Alyssa gave her. The tips of her "hair", wings, "flippers" and feet are light blue, a darker shade of light blue and magenta.

Milkshake is always seen to be very positive and energetic, much like her owner. She is always seen in a happy mood and makes others happy with her. She loves to make the others around her smile and have fun. She can make the saddest days into happy ones.

Milkshake is also an attention seeker. Being a chao, she is often called cute and adorable. She usually likes to be picked up and hugged to seek attention. She even likes to be swung around.

A Chao in the Garden

The chao was hatched in Dark Garden. An angel chao and a hero-swim chao mated, however this chao birth caused her to have a genetic mutation and disorder. Her head had two thick rounded quils on each side, and it's constantly pink, teal and light blue. She also wasn't granted reincarnation or death. Most of the chao were somewhat scared of it. It only evolved once and lived on for a long time.

Many of the other chao thought that she was unusual, some liked her and some didn't. Her eyes didn't change when she became a hero chao, she only gained a halo. Lots of the chao became scared of her, because they thought that she was going to be some sort of threat to the gardens.

The chao only had a couple of friends. However, over the past few chao years, her friends were reincarnating and dying, which made her feel very lonely. No matter how many times she tries, her friendships don't last. The angel and devil chaos scared her as well (except her parent). She didn't like it at all, so she decided to fly away from the garden.

Escape to a New World

When she was flying away from the gardens, all the chao were scared for her because no chao there knew what it was like outside of their own world. It almost looked like a ripple in the sky appeared and the chao was gone. Everything went back to normal and the other chao carried on.

On her flight, it was sort of like she was traveling in outer space. All she saw were billions of stars zooming at her. They illuminated the sky so she can actually see where she was going. Then, a blinding white light appeared as the chao traveled into it. She shut her eyes tight as she didn't want to be blinded by the light.

She opened her eyes and it was snowily heavily. The clouds were dark grey, almost like it was nighttime, but it was only 3PM. Below her were a bunch of settlements and homes covered in feet of snow. It looked like a winter wonderland. Out of nowhere, lightning struck. She was scared, and flew down.

Not knowing where to hide from the storm, she then found a rather small villa with a porch. She flew and made it under the wooden underhang. She then sighed as she made it through the storm. She felt much more comfortable now.

At the same time, a family of four;mother, father and two daughters, were on vacation staying at the villa. The older daughter goes outside because she accidently left her favorite dance shoes outside on the porch. The chao hid under a table. She then goes back and opens the door, the chao trips and makes a thump.

The girl, a dog in particular, heard this noise and picked her up. She felt bad for the poor thing and hugged it. This girl's name was Alyssa. She felt very passionate about the dog. Her mother, a rabbit named Vanilla, came out the door and asked what she was doing. Alyssa asked her mom to keep it. Vanilla replied that it was dirty and it might be infected. Alyssa then promised her mother to be responsible for this chao. Her mother looked at her and said that she can only keep it if they take her to a vet first.

A half hour later, the family goes to a local veterinarian to test the chao to see if it is safe to keep. The doctor researched her species and said that it is terrifically rare. She explained that this chao was one of the most uncommon breeds ever, which made it special. She then explained how she has to be extra careful with the chao. Vanilla then let her keep it, and then asked her to name it. She decided to name the chao "Milkshake".

Combat- Milkshake has been trained in combat on her own and by many of her fellow chao. Now, she is a very strong chao, and can knock out actual mobians, and robots.

Sewing- Milkshake wanted to learn sewing through Krys. As of now, she uses her teeth to pick up the needle and she can make her own clothes. When she gets bored, she'll often take some of Alyssa's old clothes and sew up the holes and rips.

Tennis- During her spending time with Melanie and Alyssa, Milkshake learned how to play tennis. Holding the racket with two hands, she can serve a wicked spin serve and return balls from high in the air.

Enhanced Flight- Milkshake has the power to use her wings to fly. It took her only a couple months for her to get used to her wings and the whole concept of flight. During chao races, she happens to fly pretty far and high. She flies at a normal pace however, sort of like jogging speed.

Enhanced Swim- Milkshake also happens to have the ability to swim in the water. At first it just started off as paddling, but now she swims just like an actual athlete. She only knows freestyle and breaststroke.

Enhanced Speed- Milkshake can also run at somewhat high speeds. Learning to crawl was easy for her, then she learned to walk, and now she is running faster than most mobians! She isn't near superhuman speeds, however.

Enhanced Power- Although she doesn't inherit superstrength, she is very powerful for a chao. Although her strength is her lowest stat out of all four, she is still very strong. She can climb walls, and even punch other mobians. It actually hurts.

Snow Manipulation/Blizzakinesis- Milkshake also has the power to manipulate snow at will. She is still in training in this skill, and isn't very powerful. She also has a little trouble concealing her ability, and lets it loose without her knowing.

Tip- Milkshake's weak spot is the tip. If someone hits it, the room would be up to a foot of tears. It can also even knock her out, especially if the thing that knocked her out was strong.

Night- Milkshake is also afraid of the night if Alyssa isn't nearby her. With Alyssa being her owner, Milkshake often thinks that a demon is going to haunt her in her sleep and take away her soul.

Alyssa the Dog- Alyssa is not only Milkshake's owner, but she is her best friend and partner in combat. Even since Alyssa received her egg, when she was a baby, Alyssa was always there for her. They play together, eat together, dance together, and even fight crime together! No matter what happens Alyssa and Milkshake will always be together.

Cheese the Chao- Cheese is Milkshake's brother. Being the first born, Milkshake is a heroic figure and protects her little brother from harm. While Cheese stays with Cream and Milkshake stays with Alyssa, they don't see each other very often.

Retrieved from "https://sonicfanon.fandom.com/wiki/Milkshake?oldid=1654941"
Community content is available under CC-BY-SA unless otherwise noted.