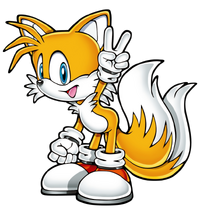 Miles Prower (nicknamed Tails) is Sonic's best friend and side-kick. He is a secondary character of Sonic the Hedgehog Extreme.

Tails grew up in Westside Island (specific area, Emerald Hill). At a young age, Tails was a genius who helped all of his animal friends with everyday problems. One day encountered Dr. Eggman who was shooting Sonic down in his airplane the Tornado. Sonic almost crash landed down into the water, but Tails flew into the sky and saved Sonic, Tails felt bad about Sonic's airplane sinking underwater so he fixed it up for him. Sonic grew to like Tails, and after a year the two became best friends, Sonic even let Tails join him on some of his adventures.

Retrieved from "https://sonicfanon.fandom.com/wiki/Miles_%22Tails%22_Prower_(Master_ventus_Universe)?oldid=1799697"
Community content is available under CC-BY-SA unless otherwise noted.