Alive
Miles Prower, known mostly by his nickname Tails, is a character from every Sonic the Hedgehog franchise (Main canon, Sonic Boom, etc).

Miles was born on West Side Island with a birth defect that gave him two tails, hence his nickname. He is able to use these Tails as a propeller to fly for a period of time before tiring out. From an early age, he was tinkering with machines and making his own. It has become a hobby and passion since.

Before Dr. Eggman came to power during the events of Sonic, the doctor abducted him from West Side Island and brought him to South Island with him in hopes of making a minion out of him. However, his soon to be arch nemesis Sonic the Hedgehog came to his rescue. Ever since that faithful day, the two have been an inseparable pair of best friends and close allies.

Sonic and Tails freed Knuckles and helped him return the Master Emerald to Angel Island after defeating Buzzsaw and Dr. Eggman.

Tails is a sweet and kind-hearted fox, but under this is a pure genius. With an IQ of over 300 (the same as Eggman's), this child rivals even the greatest scientists of all time. He excels in mechanical engineering and has created several weapons and devices that have helped Sonic and friends. He also does maintenance on Sonic's biplane, the Tornado, of which he is also the current active pilot. 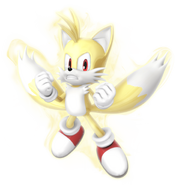