This is an article about Miles "Tails" Prower (Crimson Flame Continuity), a character created by CrimsonFlame2K on 09/16/2018.

CrimsonFlame2K, the author of Miles "Tails" Prower (Crimson Flame Continuity), considers this page to be unfinished. As such, some sections may change. 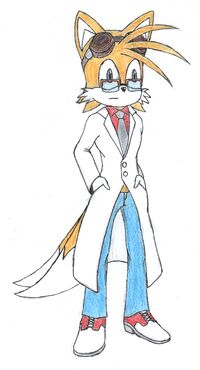 I’ve gotta do something about this whole mess.

When it comes to technology and other gizmos, Miles "Tails" Prower can get the hang of it in no time flat. Sonic's best friend, the founder of ProwerTech Industries, and a brilliant mechanical mind, this two-tailed fox will do all he can to help people out. He is one of the many playable characters in the Clash of Mythics series, making his series debut in the first installment of the series, Clash of Mythics: Genesis.

He also shows up in Rage Against the Empire, where he plays a supporting role not unlike his appearance and role in Sonic Forces, which the fanfiction is heavily adapted from, but with some changes not present in the latter.

He is also present in Flames of Fate and Destined Dark as a supporting character, appearing primarily in Episode Sonic: Through the Flames as an ally to the blue hedgehog, thus serving a similar role to Sonic the Hedgehog (2006), the game the fanfiction is adapted from.

Tails is a Mobian fox standing at five feet, six inches tall with a lean physical build. Unlike most foxes, Tails happens to sport a pair of large tails - something he has become well-renowned for - rather than just one. He predominantly sports yellow-orange fur, while his chest, muzzle, and tips of his iconic namesakes are colored white. He sports a pair of large, pointed ears with white insides, and a pair of eyes bearing bright blue irises. On the center of his forehead are three bangs that sport the same color of fur as the rest of his body, and on his muzzle lie four tufts of fur can be seen on its sides, while a small black nose is placed at the very middle.

Tails' outfit consists of a stark white slim-fit lab coat with large pockets on the sides, a bright red long-sleeved undershirt, royal blue dress pants, a pair of white gloves, and a pair of dress shoes colored in a similar pattern with his old shoes, primarily in its red-and-white coloration. In addition, he has a pair of goggles on his head that he puts over his eyes when beginning to work. He also dons a pair of spectacles with rectangular lenses with a light blue tint and orange rims.

With a positive attitude, a love for mechanics and technology, and a heart of gold, Tails is considered by many to be a great friend to have. Previously timid and severely lacking confidence in himself, years by Sonic's side have molded him into a more open and outgoing individual. In fact, his time with Sonic also seems to have led him to develop some "deadpan snarker" traits, though this only presents itself in particular situations, and generally isn’t a common sight.

Meanwhile, Tails still maintains a strong sense of humility, often not actively seeking to be in the spotlight and more focused on helping people without asking much in return. This applies even when he has full awareness of his own accomplishments, feeling no need to be boastful about any of them. However, particularly in the first few years after he first met Sonic, this sense of humility was fairly detrimental to him as he still had a lack of initiative at that point and was merely content with hanging out with his closest friend. Thankfully, he soon grew out of this during a sudden attack on Station Square by none other than Dr. Eggman, during which the blue hedgehog was nowhere to be found.

Despite all of that, he does not take kindly to anyone who decides to call his tech and other inventions "junk" or “worthless”, given that he absolutely hates it when people think little of him and see him as lesser than themselves. In addition, he really doesn't like it when people even think about touching his machines and other gizmos, especially if they're about as tech-savvy as Knuckles - as in, not at all. Although, this is mostly on the grounds of safety measures, meaning this is justified.

Nowadays, while still considering the blue hedgehog to be his closest friend, the two-tailed fox is now more aware of his best friend’s less stellar traits, such as his impatience and tendency to act before thinking, and spends more time handling matters at ProwerTech Industries than hanging out with his friends and having adventures. This is in contrast to how much his younger self was rather naive, still held the blue hedgehog on a pedestal for some time, even after that pivotal moment mentioned earlier, and even sought new adventures just like him.

Regardless of how much has changed, however, Tails’ friends can still count on him to be the same helpful and supportive ally that he always was and always will be when it counts.

Tails’ most notable traits are his large twin tails, which he receives his nickname from. Having more than one tail allowed him to develop the ability to fly through the air by spinning them like helicopter blades, granting him airborne capabilities. As well, his tails allow him to traverse underwater in a manner much like a submarine with ease. Another use of his namesakes is by spinning them rapidly while on the ground, allowing him to keep up with even the likes of the Blue Blur.

Meanwhile, Tails also sports physical capabilities that reach beyond what the average Mobian or human could do, such as having a respectable level of strength, albeit nowhere close to surpassing the likes of Knuckles, and being quite fast on his feet in his own right. On the other hand, Tails spots incredible agility and reflexes that he makes very good use of while in the air or in the middle of a fight.

Meanwhile, Tails is better known for being quite the proficient inventor and engineer. Having a high level of IQ, he uses this to produce wondrous inventions and creations. Some of his most notable creations include but are not limited to:

It should be mentioned that Tails does indeed sport a great deal of experience in fighting. Over the years, however, while perfectly capable of fighting from up close, Tails has developed a specialization for space control and trap-setting through some of his gadgets. This means that fighting Tails can prove to be a fairly difficult endeavor, if they don't know what they're doing.

For all his maturity and intelligence, Tails is still deathly afraid of lightning storms and ghosts. In addition, Tails still get dizzy fairly easily and has even been implied to have vomited on occasion and is still rather meek towards women, although this only really applies to women he hasn't known for a long time, so he's not as timid around the likes of Amy and Rouge, both of whom he has known for several years by now.

Relating to his intelligence, Tails has sometimes shown himself to be a little too confident in his skills, which has lead him to overlooking some of the simplest details on occasion. This means that if he misses something during a crucial situation, it may be safe to say that he's basically screwed his friends over by complete accident. On a related note, Tails does have a tendency of speaking techno-babble, causing people who aren’t as savvy with technology, such as Knuckles, to find themselves confused and lost in the discussion.

In addition, he has been shown to have a huge disdain for literally anyone who calls his inventions and other tech, "junk" or any similar term. This may have stemmed from that one time another brilliant mechanic called the Extreme Gear he personally customized just that.

Retrieved from "https://sonicfanon.fandom.com/wiki/Miles_%22Tails%22_Prower_(Crimson_Flame_Continuity)?oldid=1888937"
Community content is available under CC-BY-SA unless otherwise noted.