The author of Miles "Tails" Prower (Clairebear165's Universe) considers this page to be unfinished. As such, some sections may change. 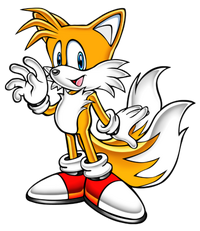 Tails is an anthropomorphic fox with the unique mutation giving him two tails instead of one. He has mostly yellow-orange fur with white fur around his muzzle, front torso, and the tip of his tails, and has blue eyes. Typically his attire consists simply of white gloves and red shoes with white toes.

Tails is a good-natured, intelligent youth who is fiercely loyal to Sonic and his other friends. Though he is at times intimidated by the obstacles he faces as a hero, he continues to press forward with Sonic as his inspiration. Despite having been involved in conflict for some years, he retains a childlike positivity and fun-loving demeanor, though he's not without a certain amount of pride.

Tails met Sonic when he was only 8 years old. He was captured by one of Dr.Eggman's (Who was called Dr. Robotnick at the time) robot's. He was rescued by Sonic. On that day, a undying relationship was born. The young fox joined Sonic on his adventures, his bond with Sonic growing more and more everyday.

Shortly after the events of Sonic Unleashed, Tails met Savannah after one of Tails new inventions malfunctioned. The robot managed to escape from Tails' lab and wreaked havoc on the city of Station Square. Savannah, at the time not knowing anything about robotics, stepped in and helped Tails subdue the machine. They both return to Tails' workshop, only to find Sonic and another new friend, who had helped Sonic destroy one of Eggman's robots (See Isaac or Sonic's page for more info on this.)

Hecate, Amethyst, and the Azure Prince

Prior to the events of Sonic Colors, Tails, along with Sonic, Knuckles, and Isaac, were assigned to destroy the Shadow Lycan after Sonic failed to do so on his own. During this conflict, Hecate, along with many other civilians that inhabited Mobotropolis, were caught in the crosshairs of the Shadow Lycan's onslaught. After helping pedestrians escape the monster's wrath, Hecate, also having dealt with demons in the past, helps take down the Shadow Lycan.

Three years after the events of Sonic Colors, Tails was the one who encountered Amethyst for the first time. She was looking for her friend and implied love intrest, Cobalt, whom Amy had found days ago washed up on a riverside (See Cobalt's page or the fanfiction Tale of the Azure Prince for more.) She went with Tails back to Amy's house, albeit hesitantly because she had never been around any other mobain species besides hedgedragons. Amethyst quickly became fond of the group, especially the females of the group.

During the same time period, Tails was in his workshop with Savannah when Amy found the hedgedragon unconscious on the side of a river. Even though he was nervous around Cobalt, Tails was one of the people who taught Cobalt and Amethyst about the civilized world, the other being Amy.

Retrieved from "https://sonicfanon.fandom.com/wiki/Miles_%22Tails%22_Prower_(Clairebear165%27s_Universe)?oldid=1696794"
Community content is available under CC-BY-SA unless otherwise noted.