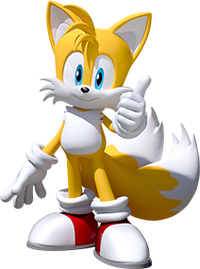 Miles Prower, also known as Tails, is a mobian fox born with a pair of distinct tails, hence his nickname. Because of this abnormality, Tails was often bullied in his youth. Shortly after meeting Sonic, however, Tails began following Sonic on his adventures, desiring to be just as cool as him.

Tails is a mobian fox with mostly yellow-orange fur and white fur on his muzzle, inside his ears, on the tips of his tails, on his torso, and inside his ears. He also has blue eyes.

For attire, Tails wears white gloves and red sneakers with white cuffs and toes but has also been known to wear dark brown goggles with orange-tinted lenses.

Miles was born to Amadeus and Rosemark Prower in Mobotropolis, with the latter dying shortly after giving to birth to him. Shortly after, Dr. Eggman began his takeover of the city. After both Amadeus and his uncle, Marlin Prower mysteriously vanished, Miles was taken to Knothole Village by Rosie Woodcuck where he was raised among the other children.

Because of his twin tails, Miles earned the nickname "Tails", but also became a subject to bullying. He would sometimes find himself alone, where he began to learn how to tinker with machines, and because of his high IQ, quickly became a master engineer, despite his age.

Shortly after Sonic arrived on Westside Island, Tails quickly grew interested as the blue hedgehog whized passed him and followed him to a beach, where he spotted Sonic's plane, the Tornado. After seeing Sonic taking a nap underneath one of the plane's wing, Tails began to inspect the plane when an explosion came from far away. Tails took cover under the plane while Sonic woke up. As Sonic ran towards the explosion, Tails instantly followed him.

Tails is a sweet-natured and gentle-hearted who is fiercely loyal to Sonic and their friends. While he was initially more shy and insecure about his abilities, Tails has become more confident in his abilities over the years of hanging with Sonic. While there have been times when Tails has felt that he couldn't do things without Sonic, he has been able to press through. Despite having been in conflict like everyone, Tails still has a childlike personality and fun-loving demeanor. Because of his growth, he also has been able to inspire Marsha to love herself.

Because of his twin tails, Tails can fly and propel himself to be almost as fast as Sonic. He can also use his tails as a means of attacking enemies and his tails, on their own, are strong limbs.

Tails, like other foxes, is naturally smart and has a higher IQ than average, but his strength comes with his knowledge with machinery. He has many inventions in his name, including T-Pup and the Miles Electric. He is also a skilled pilot and driver, often seen piloting the Tornado.

Retrieved from "https://sonicfanon.fandom.com/wiki/Miles_%22Tails%22_Prower/Marshalia13%27s_Universe?oldid=1852131"
Community content is available under CC-BY-SA unless otherwise noted.