Miles "Tails" Prower is a two-tailed, yellow-orange, anthropomorphic fox who is also from the Canon Series. 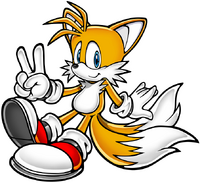 His friends and family

Believing he can do something
Dislikes
Getting left out

Being teased or made fun of

Being bothered when he is in the middle of something

When no one listens to him

People making fun of his inventions

Thinking he can’t do something

Having to fight a friend

When his friends are hurt

Ghosts (With the exception of the Light Zone Angels)

Very little is known of Tails' early life, other than the fact that he was born with two tails, given his nickname, and having a high IQ, which makes him skilled at engineering. At some point, he met Sonic, and the two became best friends.

WARNING!!! SPOILER ALERTS BELOW!!! READ AT YOUR OWN RISK!!!

Tails first appears in the first part of Chapter 4, when Rex is standing guard of his cell, as he is their prisoner, probably captured earlier that day. After Rex suspects Tails of trying to escape, Tails shows kindness to him, which scares him because he isn't used to it. They engage in a brief conversation, though Rex can only understand bits and pieces of what he's saying. Tails asks Rex his name, but he honestly states he cannot remember.

The second part of Chapter 4 is taken from Tails' POV, in 2nd person narration. He wonders how Rex's mindset has been reduced considering the possibility of brain damage or drugs (possibly both). He decides that this isn't the time to worry about that, and focuses more on repairing two robots he found, a short green one, and a tall chicken. He is able to make repairs to the green one, but is out of supplies by the time he gets to the tall chicken.After searching a wall in his cell, he finds a secret tunnel, which leads to a supply room, giving him the supplies he needs to fix the tall chicken.

Once he has repaired both, he uses the "tiny-generator-power-battery-thingy" to try to turn the robots on. The first time he tries backfires, and an electrical shock sends him flying towards the front of the cell, losing consciousness. He wakes up a few hours later when Rex prods his arm, making sure he is not dead. When Rex leaves, he tries a second time to power the robots, this time succeeding.

In the third part of Chapter 4, he is seen escaping, but is later caught by Bocoe and Decoe. However, he escapes again after the two were distracted by Scratch and Grounder. Bokkun points him out, but he flies away too quickly for them to catch him.

So far, the only known difference in his personality now than his counterpart, is that he is more calm and confident, firstly showing no fear when Rex approaches him in Chapter 4. If he has any other differences, they've yet to be shown.

Tails trademark ability is spinning his twin tails like a rotary blade allowing him to fly.

He can keep up with Sonic at superspeed, but sometimes needs the help of his twin tails to push him further.

Tails is also a skilled swimmer, sometimes using his tails to get him through the water.

His genius intellect and mechanics rival those of Dr. Eggman, one of the most brilliant minds on Mobius.

Rather than using hand-to-hand combat, he uses his strong points to defend himself from danger.