Miles "Tails" Prower is an 8-year-old fox cub and the sidekick of Sonic the Hedgehog and a character of the series. Ever since his first appearance in Sonic the Hedgehog 2 for the Sega Genesis, people considered him as cute, and is the best friend for life of Sonic the Hedgehog as well. According to the popularity polls, Tails is the third most popular character of the series, right behind Shadow and Sonic. He's been voiced by Coleen Villard, ever since Tails' voice on Sonic Boom, succeeding from Connor and Corey Bringas, William Corkery, Amy Palant and Kate Higgins respectively.

In the late 90's, Tails was originally an orange fox with the common classic appearance. A spherical body, black eyes, thin legs, and (originally) black straps (which may be a different color). Since Sonic Adventure and onwards, his appearance minorly changed. He currently has sky blue irises, longer legs,  and a less spherical body. In the Sonic Boom series, he has white bandages on his arms and legs, and brown goggles, along with the common attire as well. 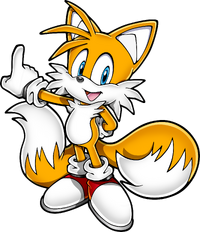 Tails is a gentle, sweet-natured fox that is loyal and has a positive attitude. When he was younger, he often fell prey tp bullying, giving him a lack of self-confidence and courage. But after meeting sonic, he gained the courage and confidence overtime.

Art by Nitrogen218
Add a photo to this gallery
Retrieved from "https://sonicfanon.fandom.com/wiki/Miles_%22Tails%22_Prower?oldid=1890224"
Community content is available under CC-BY-SA unless otherwise noted.