Darkest Shadow, the author of Mildred the Cat, considers this page to be unfinished. As such, some sections may change.

Aww~ Thanks~ I love you too~! You should go crawl in a hole and die, you ugly little b*tches~ Yay!!!

— Mildred when Team Fashion makes fun of her 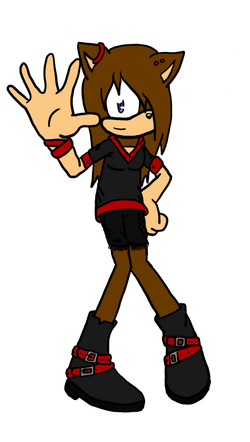 Mildred the Cat is a fan character created by Darkest Shadow. She is a cheerleader, a flyer, and tumbler, of Alskora High's Cheer Team. She also happens to be the cousin of Michelle the Cat.

Mildred was born in Mariala City, while her parents were visiting her soon-to-be uncle when she unexpectedly had her baby while they were leaving. Neither parent expected the baby to be born here. They had to cancel their flight home and raise the baby in a local apartment. It took them a while to adjust to being parents, but after two weeks, they got out and flew 2 hours back to Alskora City.

She grew up in Alskora for her whole life. She had a passion for cheerleading. She was extremely flexible, getting the nickname of "Elastigirl" by her friends and peers. She was the flyer, due to her being very light and pliable.

When she was eleven years old, her cousin, Michelle, flew down to Alskora City. While Michelle has been waiting for the day to meet her, Mildred didn't even know that the two of them were related, let alone cousins. She was there for three weeks, and the two bonded very well. Michelle even taught her how to tumble, since she could barely do a simple back handspring.

When middle school came to its final years, Mildred was already one of the most popular girls in the eighth grade. A great fashion sense and a bubbly, flirtatious attitude, everyone liked her.

Like all cheerleaders, Mildred is upbeat, cheerful, and has energy to spare! She has that fun and happy personality that everyone enjoys. She gets happy very easily from good news and makes everyone else around her as cheerful as she is. She tries her best to stay positive and not let other people bring her down.

Along with her happiness, she is a powerful and persuasive speaker. She is great at giving speeches and does it all with a smile of not only determination but pure pride on her face. She can persuade people to do many things, even if they sometimes don't even want to.

Mildred can also be seductive, attractive, and appeals deeply to a lot of boys. Being an amazing cheerleader, she is also very popular among most of the kids in her school. She happens to get a lot of attention as well.

Mildred stands at 3'7 and weighs at a low weight of 75 lbs. She has brown fur with matching brown hair. SHe has a bang covering up the left side (Viewed as the right side) of her face. There is no fur covering her arms and tummy. Her ears are small, and she keeps her tail short. Her hair is short and goes down to a little above her waist.

For her regular outfit, she wears a complex attire. She wears a black shirt with a red collar, and red sleeve ends. The bottom of her shirt is also red. She wears black denim shorts with ripped edges. She wears combat boots with two red straps on each leg, with silver buckles and black soles. On her right arm, she wears two red straps as a gift from her cousin. Just as an accessory, she wears one ring earring on the right ear, and two dot earrings on the left.

Cheerleading- The talent that makes Mildred well known and popular, Mildred is one of the best cheerleaders on her team. She is by far the most cheerful and energetic, and can make the crowds go wild with her trademark smile and emotions. She is highly flexible and can perform various stunts while being held up, such as tic-tocs and needles. Her famous dismount is her switch-kick triple. Her jumps are high and her kicks are big.

Extreme Flexibility- Mildred possesses high amounts of flexibility, as stated above. She can contort her body into different shapes and figures that can be beyond belief. While mostly, it amazes crowds and makes them feel jealous of her flexibility, sometimes she is so flexible, she is said often called rubber, and can creep people out.

Enhanced Speed- Although they aren't superhuman, Mildred can run at extremely high speeds. She is one of the fastest runners in her city, and can blow several leaves off of trees. She often shows of this skill while she does cheerleading.
Retrieved from "https://sonicfanon.fandom.com/wiki/Mildred_the_Cat?oldid=1852940"
Community content is available under CC-BY-SA unless otherwise noted.