Start a Wiki
This is an article about Midori the Bat, a character created by Xsdoubletrouble on 07/24/2015. 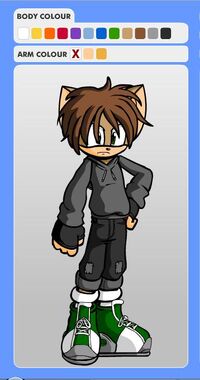 Midori is a short male bat with tan fur and green eyes.  He is blind in both eyes, and his hair is messy and a darker brown than his fur.  He normally has a neutral or bored expression on his face.  Normally, Midori's wings are tucked in, since Midori hates flying, but when his wings are out, they are tan with brown undersides. The normal attire worn by Midori is a dark gray hoodie with the hood down, black shorts, white socks, green sneakers, and black gloves.  It is unknown whether or not Midori possesses a tail, but he most likely does.

Midori is a mostly silent person.  He rarely speaks, and normally he only speaks to Tammuz, Asher, or Blackjack .  He dislikes Xlphys, possibly because the other bat is shouty, but Xlphys was at one point Midori's friend. Midori mentors Kerberos, possibly because he admires the young pup's determination to be the very best at everything.

Midori is allergic to mint, and as such, he hates mint.  His favorite food of all time is cream soda jellybeans, which most of his friends fine weird.  Midori suffers from an intense phobia of insects.

However, when he was nine, he met Xlphys, and they became friends, later drifting apart due to their differing personalities.  After turning twelve, he encountered Tammuz, Asher, and Blackjack, soon becoming friends with the three.  When he was thirteen, Kerberos found him and asked him to mentor him.  Midori agreed, and has been mentoring Kerberos for about a year.

As a bat, Midori is able to fly.  He can fly just as much and as fast as Xlphys can, but he rarely does so, as he hates the feeling of being up in the air.

Since Midori is blind, he has developed excellent hearing.

Midori is relatively fast, both in the air and on the ground.

Retrieved from "https://sonicfanon.fandom.com/wiki/Midori_the_Bat?oldid=1799695"
Community content is available under CC-BY-SA unless otherwise noted.