This is an article about Midnight the porcupine, a character created by HeroMickey on 02/21/2013. 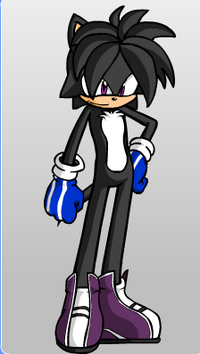 "that one guy" by several people

writing his own spells

toe socks (they creep him out)

Midnight is a black porcupine with white/peach coloured skin. He has purple eyes and purple shoes, he figured if he was gonna match anything to his eye colour, it'd be what he puts on his big honking feet. He has a pair of blue gloves with white stripes on them because he can, and has a white belly.

Midnight is very laid back and chill, he doesn't worry over small little things because he thinks it would just make him feel worse than he would already.He cares deeply about his friends, but knows to not be too clingy, he lets them do their own thing and he does his own. He's very solitary, but not in an "I'm emo and I want to be alone" (as he'd put it) kind of way, it's just that usually what he's doing doesn't go with what others are doing. He's kind of a goofy fella, often cracking one liners and jokes, even if people don't really get them. He figures "eh, at least I got a laugh". His approach to fighting evil is pretty casual, only actually fighting when neccesary, since he knows that "Sonic's got this". he prefers to be in the background, planning attacks out as opposed to actually going all out.   He does however take his magic pretty seriously, and will focus for days on end on it, becoming uncharacteristically determined and focused on it.

Not much is known about his history since he doesn't talk about it, mostly because he doesn't really care about it much, whether he's hiding something remains to be seen. All that's really known is that he was born on west side island.

Midnight has practiced magic for almost all of his life and has become quite good at it, mostly elemental and void magic (void basically being dark magic) as well as light magic and even chaos magic (although he cannot release chaos energy in the same way someone like shadow can, so no chaos spears, and no chaos control) with that said though, he still has a lot to learn about the magical arts. as anyone would, seeing as how he's only fifteen, and most of the most skilled magicians are in their hundreds.

Midnight has B class speed meaning that, while not as fast as Sonic, he's still pretty fast, at least for someone without the power of super speed. His black fur and his abilities with void magic means he is decent with stealth, so he's good for spying, not quite as good as say Espio, but still not bad.

Midnight has impressive powers of deduction and reasoning, since he likes to think things out clearly. He's also a pretty good stategist, again the result of his thinking things clearly.

He can be kind of absent minded at times sine he susually focuses on one thing at a time. Since he often looks at past things as just "water under the bridge" he has a tendency to say silly or even hurtful things without meaning it, giving him little tact.