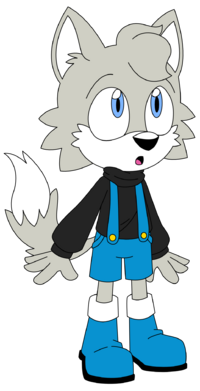 A young Aurakinetic cat trying to keep his older brother (and himself) out of trouble, Micah the Cat (pronounced "MY-kuh") is the younger brother of Calvin.

He is based on Mugman from the indie game Cuphead.

A slightly chubby cat who stands a fair bit over two feet tall, Micah has a short muzzle with a large triangular nose, medium-sized, pointed ears, and a medium-length, fairly fluffy tail. He has a gap in the middle of his teeth.

His fur is primarily pastel gray in color, with a white muzzle, inner ears, chest, stomach, and tail tip. He has no hair on his head, instead having a longer tuft of fluffy fur, and his eyes are parakeet blue in color.

Micah was born AFAB. Both him and his brother Calvin were taken to their grandfather Barnaby (on their mother's side of the family) when they were just babies; this was in an attempt to keep them safe, and since their grandfather lived in the United Federation City-State of Station Square, both parents were also hoping the presence of G.U.N would keep their kids safe.

As such, both kids grew up not even really knowing their parents; their grandfather was their only family, as far as they knew, and he loved them both dearly. When Micah was around 5, he began to show discomfort at his assigned gender; he just didn't feel right as a girl at all. When telling his brother and grandpa about this, they supported him completely, and Barnaby took him to get his name legally changed to Micah.

At one point in time, when Micah was around six years old, he began to develop a fever with a cough. Barnaby wasn't terribly concerned at first, as Micah didn't have the best immune system to begin with; fevers and colds weren't too uncommon for the boy, so his grandfather simply took care of him like he normally did. Three days later, however, he noticed that Micah's fever and cough wasn't improving much at all, and on top of that, the boy was having difficulty breathing. Growing worried now, Barnaby took him to the doctor's (much to Micah's displeasure).

Sadly, the doctor wasn't terribly helpful; after examining Micah, he diagnosed the boy with acute bronchitis, and since bronchitis is caused by a virus, antibiotics would not help Micah. As such, the doctor simply instructed Barnaby to keep taking care of Micah while his body cleared up the bronchitis on its own, and sent the two back home. A week had passed since then, and Micah's condition did not improve. He had begun to develop a pain in his chest that was exacerbated by his coughing, and he still had trouble breathing; he also started to get bad chills. Irritated that the doctor had not been able to help Micah at all, Barnaby instead took the boy to the hospital for another diagnosis; this time, the news was much more serious.

As it turned out, Micah had pneumonia, and it had advanced to the point where it was necessary for him to stay at the hospital to recover; unsurprisingly, the boy was terrified of the prospect of having to stay in a strange, scary place, away from his brother and grandfather. Despite his ailing health, he literally fought to go back home with Barnaby, but the older cat had no choice but to put his foot down; this was for his grandson's own good, after all.

And so, Micah spent a miserable two weeks in the ICU of Station Square Medical Clinic, loaded up with antibiotics and IV drips to fight off the severe infection, and spending much of his waking moments sick, shivery, and cranky; thankfully, Barnaby and Calvin came to visit him every day, and they were visits that Micah always looked forward to. It was a difficult road to recovery, but miraculously, Micah survived the ordeal, although he did not get out of it unscathed; he ended up developing asthma, which would likely stay with him for the rest of his life.

When he and Calvin were ten and eleven respectively, they met Weiss, who had had a problematic life due to his abusive parents. They were quick to befriend him but a week later, the guards soon took Weiss away to the detention center, and both Calvin and Micah were held back and unable to stop them from taking their friend away.

As a child, Micah's not exactly powerful; his physical strength is rather paltry, being only as strong as the average human child. Being a cat, he is quite fast (although a little bit slower than his brother Calvin), and he has a keen sense of both hearing and sight; he also has natural weapons in the form of sharp teeth and claws, although they're not quite as effective as the teeth and claws of an adult cat. He has mild asthma (he's had it since he was six), and this makes it difficult for him to run for extended periods of time.

Micah is capable of manipulating the Attribute of Aura, although he's not proficient with it yet; as of now, he's only capable of heightening his senses and agility, and using the Aura Shot technique, which is a weaker version of Aura Sphere; repeated uses of Aura Shot will tire him out, however. His aura appears blue in color, as opposed to Calvin's red aura.

He is noted to be able to heighten his senses and speed better than Calvin can, although his Aura Shot is weaker than Calvin's.

Micah has no specific resistances to any Elements or energy-types. He is quite fast, and can easily outpace slower foes and evade their attacks.

Anything that is capable of disrupting altering, or blocking Micah's energy flow will outright cripple his aurakinetic abilities, as will any kind of psychological attack that clouds his mind; constant distractions can also disrupt his aurakinesis. He has no specific weaknesses to any Elements or energy-types otherwise.

His defenses aren't anything special, therefore he mostly relies on his agility to try and evade potentially devastating attacks. Long periods of high physical activity can greatly exacerbate his asthma. He's also severely allergic to tree nuts; eating anything with those in it will give him severe allergic reactions, or even anaphylaxis. He also has a somewhat poor immune system, and he tends to get sick rather easily.

Compared to the boisterous Calvin, Micah's much more shy, usually preferring to let his brother do all the talking. He'll talk when spoken to, however, and it generally doesn't take him long to warm up to someone. He tends to get annoyed with Calvin's reckless nature, and it sometimes leads to the two of them arguing; his annoyance stems from worry, however, since he just doesn't want his older brother to get hurt.

Micah knows that Calvin's very protective of him, and while he appreciates the care a lot, he sometimes finds it stifling, as if he's being treated like a baby or something (even if this isn't Calvin's intention at all). He's terrified of deep water, thunderstorms, and hospitals; his fear of hospitals is due to him having nearly died of pneumonia when he was six years old.

Like Calvin, Micah has a strong sense of curiosity, but he's much less likely to wander directly into a bad situation just to satisfy it, given his more cautious nature. He can also be quite mischievous at times (not unlike his brother), and the two of them are not above pulling pranks on people purely for fun; he, like Calvin, also has a tendency to be rather bratty towards people he dislikes, even moreso than his brother.

Micah in an alternative outfit. 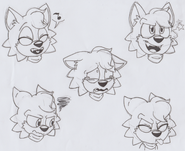 Some facial expressions.
Add a photo to this gallery

Retrieved from "https://sonicfanon.fandom.com/wiki/Micah_the_Cat?oldid=1857579"
Community content is available under CC-BY-SA unless otherwise noted.