Witch of the Southern Wind 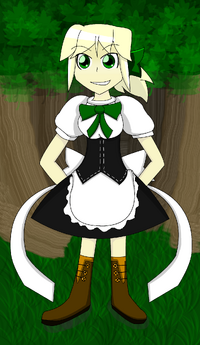 black corset, a green charm on her chest. Wears a black skirt with a fake apron tied with a large bow.

Able to see the truth with her

Mia was once a normal human magician until she successfully crafted the Elixer of Immortality. After taking the elixir, she has realized that it was the worst thing imaginable she was ever done to herself.

She lives in between the Hayashi Forest and Southern Border in Mobius. She was given duty to protect the lands beyond the Southern Border, like a gate keeper. She is immune to any death, which is why she was given the job in the first place. She can allow people to enter the border with Space manipulation, but she won't let them out unless she is currently with them. She lives with a fairy by the name of Ser'ee, who is her assistant. But Ser'ee does more harm then good in Mia's book. Because she never leaves her home, she lacks knowledge on social skills.

She uses wind and space magic. With the power of her wind magic, she can fly without a broom and turn into the very wind itself and become invisible. But she needs to be very careful when she sneezes, or she'll blow something away. Her wind magic is what made her known to be The Witch of the Wind, since she's a pro at it. But she is able to perform the taboo magic, Space. With it, she can manipulate distance and placement. She is able to make a gap out of then air and when she walks into it, she can walk into a distant place, also can be known for teleportion or summoning. She is able to conjure up Shikigami arms from her spacial holes and do many things with them, snatch, attack, defend, or just lend a hand. But the magic is hard to use even for Mia, and large space holes require a lot of energy to make and she gets tired out easily. She is able to combine her powers of wind and space and create great gusts of powerful wind from space holes, which she calls, Wind Tunnel.

But, she was born with a power. She has named it, "The Eyes of Truth". Her eyes are inhuman green color, and those eyes are able to see what others can't. She can see past illusions, disguises, and facades. Not even a Nue can deceive her eyes. Her eyes change when in use. She says the power to see the truth is a feared power, because the whole world is lying lately.

Mia is limited in other magic classes, but she tries in what she can do.

Mia likes to use a type of weapon, Exorcism Needles, with a combination of her wind magic, they become deadly knives. She has a endless amount, must be warned though. They home-on target. She uses them as projectile weapons, and since magic can't really kill demons that well, she uses them. She can accurately pin down a demon with them.

Hair- Very light blonde, tied in a ponytail with a green bow.

Mia likes to name her spells...

Wind Sign- Corruptive Cyclone- Mia uses a combination of black magic and wind magic, the wind causes great debris of dark blasts and it homes on

Black Magic- Wind Tunnel- Mia's favorite spell. She uses a combo of space and wind magic, she opens a big gap where she blasts a giant powerful destroying tornado from it.

Secret- Body of the Wind- Mia becomes one with the wind and can make herself invisible.

Eternal Winds- Destruction of the Monsoon- Mia's most powerful spell, she manipulates the monsoon winds to create powerful wind storms. But this spell relies on the season for her power, the best time to use this spell is during late spring and early summer. She was able to learn this spell after gaining immortality.

Spacial Sign- Shikigami of Sub-space- Mia uses this spell even when there was no need for it, she summons a bunch of shikigami arms to do her bidding. They can attack, wrapped, clutch, hold as if they're her extra limbs. She uses them for daily needs as well.

Spacial Sign- Displacement of Physical Body- Mia uses this spell to teleport from place to place by opening gaps. The bigger the gap, the more power she needs. She can go even on the other side of the world with this power.

Taboo- Displacement of Space- Mia uses a powerful spell that alters space around her, so that one pathway is altered into another. It is complex, and only she was able to master it. She also can disguise herself while in use of this spell.

Taboo- Nightmare World- A powerful spell where Mia curses all into a sub-world she has created, but the power use is so much that her body might end up being distorted as being split in two. She created a charm to prevent this from happening. (She wears the charm on her chest)

Curse- Eyes of Truth- Mia uses the power of her eyes to see the truth in others. In offensive means, she can distort the minds of any who looks into them.

Curse- Eyes of False- A power that it took Mia a long time to work, she uses her eyes to hide the truth and can cause illusions instead of destroying them.

Mia's World- Mia uses the true power of her eyes and alter the world around her with a combo of her space magic. It is her most powerful spell. 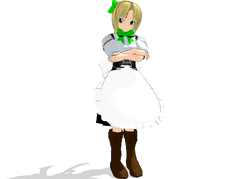 A 3D picture of Mia 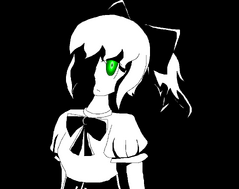 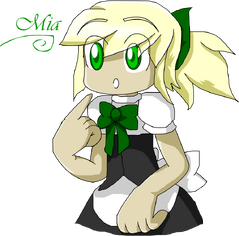 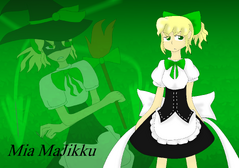 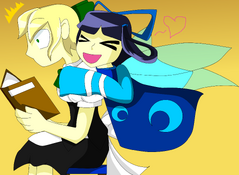 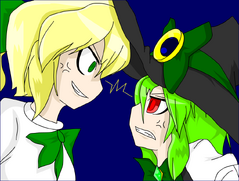 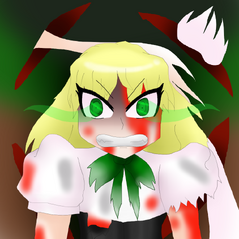 Mia in a tough fight

A dark picture of Mia and Kori 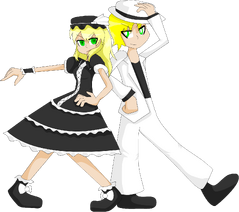 Mia and Kori in a Dancing Getup
Add a photo to this gallery
Retrieved from "https://sonicfanon.fandom.com/wiki/Mia_MaJikku?oldid=1798253"
Community content is available under CC-BY-SA unless otherwise noted.