Start a Wiki
This is an article about Metal Teccbad, a character created by Metal-Teccbad. 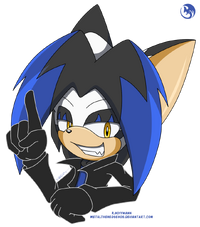 Most of the Time she appears like a Bat with a long strange Tail and big Wings. And often she shows without her Wings, because she can let them disappaer in her Body. Her Fur is a mix of white, black and blue and her eyes are yellow-golden.

Standart clothes of Metal are a blue Shirt, grey or blue Jeans with a chain on it, black Boots with Buckles, black leather Gloves and a black leather Coat.

In the year 2xxx an alien spies landed on an unknown planet. He was looking for a habitable planet in which it would be worthwhile to conquer it. After several months of study he sent back some samples to his home planet. In this samples was a blood sample from one of the species which lives on the unknown Planet. It was the blood of a Bat. This blood was mixed withe blood of the alien species to create a new life. This unknown alien species had created a new entity with its properties and those of the essence from which it had the blood sample. After few weeks fully grown and after a few months of training, Metal was sent back to the planet which has been previously explored. She mostly looks like a Bat, so she can infiltret easily this World and will not have the Problems like the spy before. This Planet will soon be doomed.

Such was the plan. However ... Metal may have been physically suited but she was not necessarily the right person for that. She really want to their Job, but nothing works like it was planned. She quickly noticed: the Heroes of this World aren't easy to defeat.

Metal has a very stubborn and impatient character. Often she is deflected and not concentrated on what she is doing. So she often manages to destroy her own machines and flying ships. Some damage is acceptable. Everything is fixable. She loves Weapons. The technology of them and the destruction which they can do. Beside of this she loves a few things which she has found on the Planet which she should infiltrate. Videogames, Movies (especially Horror, Scifi, Action) and Cocoa. No, really. Those drink is one of the most important thing which she has found on the Planet.

Except for their Alien Chefs she listens to no one. She is very sure of herself and her plans. Unfortunately, it happens all too often that an error is in the so-thought plans and she fails at the end. She is sure to be evil and her actions aren't the nicest, but sure there are a lot Villians which are much more evil and dangerous then her. But no one should underestimate or ignore her to much. Metal is still a villain and like a little catastrophe for the Planet, her Home Planet and last but not least for herself. It makes her crazy that her Plans doesn't work, but she will never give up to tries it to attack Cities and to infiltrate and conquer the Planet.

1 of 5
Add photo
Retrieved from "https://sonicfanon.fandom.com/wiki/Metal_Teccbad?oldid=1799742"
Community content is available under CC-BY-SA unless otherwise noted.