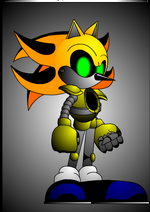 Like all robots, Storm created him after many failures in hope to defeat Prowler and anyone who gets in his way. Ever since then, he assists Storm, Excolous, and The Quest to their main campaign.

Metal Prowler is programmed to know leadership skills and to be loyal and willing to fight off anyone. His personality is a lot like Excolous or any other loyal assistant.

"Let victory turn in favor for us or suffer a thousand torments!"

"Master. What are your orders?"

"I would rather die a hero than to live a coward."

"The enemy is planning to trick us! Deploy a counter assault on them and don't fall back unless you got every single one of them."

Retrieved from "https://sonicfanon.fandom.com/wiki/Metal_Prowler?oldid=731106"
Community content is available under CC-BY-SA unless otherwise noted.