This page is for Metal Knuckles from any person's continuity! 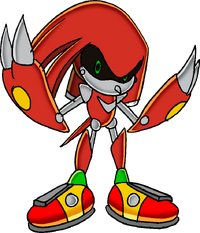 He is planned to appear in certain missions of Knuckles Stages. With the ability to turn it's claws into a drill and has a built in item detector, is able to rival Knuckles equally in his abilities treasure skills. The first to find two treasures wins.

Metal Knuckles appears in Sonic Rivals 3 as the main antagonist of the game, whom Metal Sonic, who had become self-aware, uploaded NEGA's mind to.

Metal Knuckles appears as a boss in the stage X-Perience Zone. It is sent by Dr. Eggman and Snively to defeat Sonic and his team.

Metal Knuckles' first appearance was Sonic R, and his only official appearance.

Metal Knuckles is just as stupid as Knuckles in this universe. He appears in Creepy Fears 2 as a member of Team Metal. His appears to remain alive and share Knuckles famous line, "Darn it."

Retrieved from "https://sonicfanon.fandom.com/wiki/Metal_Knuckles?oldid=1780484"
Community content is available under CC-BY-SA unless otherwise noted.