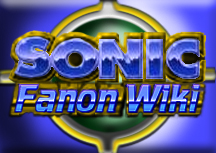 Hi, welcome to the Sonic Fanon Wiki! Thanks for your edit to the Roleplay:Lightning and Thunder! (Open) page. Sonic Fanon Wiki is the wiki for Sonic the Hedgehog-related fanfiction! Please, enjoy the wiki! However, there are a few things you must know....

Please read through our policies. They explain in detail what you can't do here. If you refuse to follow them, you will become a victim of the dreaded Banhammer!!

There are many different places to go for help, such as:

There are also sectional help areas, for example:

How can you start?

Well, you've just made your first edit here! Congratulations! Well, you can expand short articles, start new pages, learn how to (or participate in a,) roleplay; there's a lot you can do!

Ask around. Many users might need help with something! You never know what you can do to make this wiki better!

She's a spirit. I didn't put Mephiles name. Mason the Hedgefox did. And his fan character fights him.

Well, after Jesse talks to Tails, Oliver talks to Tikal, which is you, about Abby's werehog form.

I was editing and you made the edit conflict so you have to fix it.

Your sorry. But you still have to fix it.

I'm not mad, but why don't you ask masonthehedgefox. The user.

It was Mason the hedgefox and ITH. I told them not to do it again.

What did you do to my roleplay?!

It's okay. Mason is fixing my roleplay for you and me.

Now you really made a mess on my roleplay.

I'm not going to kick you out.

I'm not yelling at you. I'm just a little upset that's all.

Ask some people who knows all about wikia to fix my roleplay for you.

I ask some people in Sonic fanon chat to fix my roleplay.

Try to read How to Avoid Edit Conflict.

That's ITH character. He didn't put his character's name on it.

Maybe ITH is sick or something.

Me. His appeared when Bailey's minions attack Sonic and the others, but somebody uses him.

I guess I do. Tikal will fight Dark Gaia and Frozen Sonic will fight Bailey the Dark Wizard.

Oliver has a girlfriend. Eve the Fox.

Lewbert is an echidna as well.

How about not. Charles is good.

Wait after Sonic and the others find Klonoa and Abby and meet Dan.

I'll think of something.

I prefer Tabitha being single.

He hits on every girl.

Where are you? Tikal is supposed to seal or destroy Dark Gaia!

I was accused of trolling by saying i hated Metallica. I only like one song by Metallica. and that's "One"

Mittens may Be a Bengal tiger Kitten now but when shes older she will terriorizes people. Mittens the Two Tailed-Bengal Tiger.JPG 00:17, September 5, 2011 (UTC)

I meant can you follow a storyline and not send the plot on a tangent focusing purely on your character, and not insert your character into every single scene? Sir Flare, Knight of The Flaming Sword 05:42, October 17, 2011 (UTC)

Yo,u there?Just wanted to start woking on articles with you again.Pleeze reply,Shadowluv444Every Time I See Ya I Say Sorry But Im Evil What Can You Do? 22:30, October 19, 2011 (UTC)

Our first article after we got off our bans:R.E.:Luna the Wolf

we should make a page for Luna the Wolf and give her more of a story.

here's what I've got so far:Luna is a wolf from the wolf city of Lunesta and is Tails' cousin.Shadow and Silver taught her how to use their moves(ergo the grey stripe running down her forehead and Psychokinetic mark on her left hand)but she learned to run as fast as Sonic because Eggman used her for a test subject and infused her with Sonic's DNA(a little creepy,right?).

Because it was the only way she thought she could be released(because she knew nothing of her powers yet)she decides to capture Sonic and work for Eggman, but regrets it when Eggman blows up Freedom Fighter clones and Sonic goes berserk,rewiring his brain so that now,he willingly works for Eggman.

She turns on Eggman,so Sonic locks her up,'graced' with the job of guarding her.Eggman says"Oh well,the loss of one ally is the gain of another."(just thught you might wanna know)

HSe is often mistaken as Tails' evil twin because of her claws and dark fur.She often holds a soft glow under her fur on the night of a full moon because she was put under a spell at birth which,in turn,actually DOES make her evil(much like the effects of being controlled by Dark Gaia).She often asks to be locked away on those night,but due to rejection of this request by her kind-hearted cousin,she frenzies through the forest,destroying everything in her path.

She is a genuinely loyal person,due to her canine ancestory.She absolutely relishes the donfall of her enemies,much the same as Shadot`e and is careful who she fights most of the the time.She is also one to hold a grudge.Much like Dark Super Sonic,this is due to the pain and misery of her friends.Her white gloves each harness the power of a Moonstone(we should do an article on those,too!)which help her control Darkness Energies(I smell another article here!!!!!)at night.

She developes a love for Shadow and a throst for his power only to be satisfied when.....?????????(when what?I really couldn't think of anything!!!).

She has never been able to control her transformations,Sonic has a secret crush on her,her favourite phrase is"Gotta jet,Sonic wants to lose to.....I mean RACE me again."and"Of course I don't love you! I just don't wanna be seen kidnapping the World's Largest Piece of Poultry"(when Sonic almost forgets about the race that was scheduled that afternoon).She only has four claws on each paw.

Hell yeah, but first i need to go somewere, be back in 2 hours

Yep, you can be the one to knock on the door to invite them

Can I ask you something?

Will you plz check out my wiki page on here? I don't know if it sounds good or what. This is my 1st page anyway but no one's looked at it at all. It's called Sonic the Hedgehog (In Shon's World).

Do you know when The Choas highschool roleplay will start?

Hey,want to Roleplay on Chaos highschool?

You're up. By the way, my name is Lauren.

Possible girlfriend for Wen the Hedgehog?! Yes? No? Maybe?

Heya! Its PeaceGrrl, best known in youtube and deviantart, but my user name of this website is Shina the Dragoness. Now, Wen the Hedgehog looks GORGEOUS!! He is handsome!! My OC named is Shina the Dragoness, have a picture but it is not yet color!! (working on it now!), is somewhat interest to be his's girlfriend. But I need permission first! Shina is really pretty!!! (I believe so!!) and yet even though she like Sonic and Shadow, if I put "Sonicman667's universe" in Shina's bio of Romantic Interest and you put "PeaceGrrl's universe" Wen's bio of Romantic Interest, we still have our primaries love interest. If you do not want to do it, then it fine with me. :3 Here a link to Lady Shina the Dragoness: http://sonicfanon.wikia.com/wiki/Lady_Shina_the_Dragoness . Tell me what you think!!!

Well, Lauren is actually one of Cameron's sockpuppets. I'm not sure about the whole concept with Tikal being married to Sonic or anything, but...yeah. Yes, I snuck in on your conversation. >:3 XD NightmareHouseFan 02:31, March 7, 2012 (UTC)

Retrieved from "https://sonicfanon.fandom.com/wiki/Message_Wall:Sonicman667/User_talk_archive"
Community content is available under CC-BY-SA unless otherwise noted.