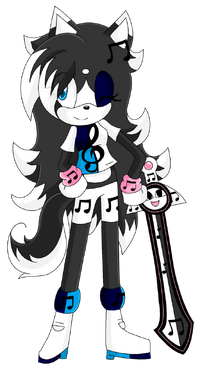 Mercury the Husky (水銀はハスキー Mākyurī wa hasukī) is a female character created by Nikki-Kaji. She is 15 years old, and was born on Mobius in a greek-like country named Loraos. She's lived there her entire life. Mercury's middle name, Calliope, means beautiful voice in greek.

Mercury lives in the greek like city, Loraos, with her parents. Currently, she looks a lot into greek mythology and history, studying and adventuring. Mercury is also practicing on learning the greek language.

Monday through Thurday form 8:00 am to 2:00 pm, Mercury's mother home schools her. After that, Mercury either goes into the forest, or practices at the battle arena. Sometimes, when in the forest, she'll spend the night there!

Mercury is adventuroes, brave, and smart. Her study of greek mythology and history has increased her intelligence a bunch. Also, her constant ventures for proof of her studies has made her adventurous and brave.

Mercury needs proof for whatever she reads or someone tells her, which can sometimes get her on a new adventure. This mostly comes from her reading, always trying to find proof about ancient greek.

Mercury is always ready to venture out and do the unexpected. She doesn't hang out with many people, except for a few friends that sometimes venture out with her. Mercury's parents always tell her to get her head out of the fantasy world and focus more on her sword training. But this doesn't discourage her at all.

People usually tell her that she needs to act more like a girl. She tried putting on makeup once, but ended up getting mascara in her eye, so it never happened again. The same with lipstick. She accidentally swallowed some and ended up getting sick. It was as if she was destined to be a tomboy

Mercury is yet another adopted character, who was previously owned by a member on deviantart. She does not own the sword that appears in her picture, and instead has a normal, simple sword.

Since she was little, Mercury has always loved greek mythology. She started getting into it when she looked up what her middle and last name meant, followed by another greek names, which leads up to where she is now. Her studies advance over time, going out for research on the greek myths to see if they're actually myths or not

Once on an adventure (around the age of 12), Mercury met a wood nymth, but the two didn't get along very well, along with other wood nymths. Luckily, a small water nymph named Naiya saved her, and the two became friends. Since then, Mercury always visits the water nymph.

Mercury is very skilled with a sword. The name of her sword is Unislash. She holds her sword with both hands, which increases her power but decreases her speed. Whenever she has free time, she trains at a battle arena along with other swordsmen. 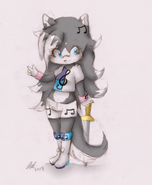 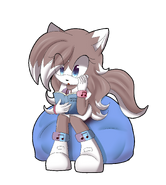 Mercury reading about Greek Mythology (by Mizu-Kumi)
Add a photo to this gallery
Retrieved from "https://sonicfanon.fandom.com/wiki/Mercury_the_Husky?oldid=1654940"
Community content is available under CC-BY-SA unless otherwise noted.