"You took part in the War of Time! You took over New Ninjago City and drove out all the inhabitants! You tried to kill Fox! What makes you think I'll trust you when I was told about what you did during the War!?"
—Boulder the Lycanroc raging to Mephiles, The Dusk Wolf

Mephiles the Dark is a major antagonist in The Legend of Fox the Brave who first appeared in the infamous 2006 Xbox 360/PlayStation 3(PS3) video game Sonic the Hedgehog(better known as Sonic '06). In The Legend of Fox the Brave, he is the instigator of the Battle for New Ninjago City during the War of Time in the story of the same name. Mephiles makes a minor appearance in both The Dusk Wolf and its sequel Return of Evil, and is the main antagonist of the third story, Shadows of Vengeance. He returns as a posthumous(of sorts) antagonist in the story Storm of Darkness, and as a major villain in Storm of Warriors. 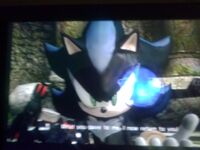 Mephiles retains his appearance from the Sonic series.

Overall, Mephiles greatly resembles Shadow the Hedgehog (Archie) due to taking his form during the latter's mission in Kingdom Valley, but with a few key differences.

Similar to Sonic.EXE, and later Infinite, Mephiles is cruel and sadistic, taking great pleasure in tormenting and constantly taunting those he targets. However, if he views someone as useful, he will try to convince them to join him; so far, he's only done this to Shadow the Hedgehog and Boulder the Lycanroc, both of which refused for their own reasons(Shadow understood Mephiles' true motives, while Boulder had been told of the being's atrocities during the War of Time).

Before the Series: Unknown, but most likely the same as in the Sonic series.

Shadows of the Past: While vaguely unnamed, Mephiles appears in a couple nightmares of Ferrell's, and Mega Force members Sceptile and Lucario argue over whether or not to tell the scarred fox about him.

Return of the Werehog: Mephiles appears in a vision E.J. has while in Kingdom Valley. E.J. sees finds himself protecting Austin Smith(as a human) from the strange being, whom the young boy recognizes and is terrified of; the blue hedgehog is nearly overwhelmed by the darkness he senses. E.J. protects the boy until the vision ends, and he speeds off back to Soleanna Forest, unsure of what to make of his vision.

The War of Time(story): Mephiles first appears in a nightmare Fox the Brave has. Fox begins to feel like he's suffocating, as if his lungs themselves are being squeezed while Mephiles laughs at him all the while. After Fox is viciously beaten by Shadow the Hedgehog (Sonic Boom), Mephiles surprises the leader fox while he's exercising in a storage room by moving things around. Liam the Chesnaught bursts into the room, and Mephiles leaves when the Spiny Armor Pokemon enters. Later, Mephiles takes over New Ninjago City, driving out the civilians, and Fox leads a patrol to interfere. Fox becomes Fire Fox, and easily beats Mephiles, but when the Storm Fighter leader reverts to normal after the fight, the being practically stabs Fox in the back, effectively killing him. However, Tai the Charizard visits Fox and helps him return to his body and achieve his Feral Fox form for the first time. After this, Feral Fox easily beats Mephiles.

The Dusk Wolf: Mephiles appears in a dream Boulder the Lycanroc has. The young Dusk Lycanroc dreams himself into Flame Core(unnamed), and encounters Mephiles there. Mephiles attempts to get Boulder to join him, but the young warrior is unconvinced; when the Megastone Rogue puts two and two together, he rants that he will never trust Mephiles because of what he did during the War. Mephiles asks Boulder if he'd rather live knowing he cannot stop the disasters he sees in his visions, and Boulder insists that if he has these powers, then it is to help his Teammates prepare for them. Mephiles then calls Boulder a fool before changing appearance and summoning a swarm of strange, shadowy creatures(the same ones from Shadow's second Flame Core Boss). Boulder starts singing Warriors, then uses Stone Edge on Mephiles, before waking up, silently hoping that after that, he will be left alone.

Return of Evil: After Boulder fails Continental Crush, he has a terrifying vision of Mephiles, and remembers what the shadowy being told him when he failed to convince the young Lycanroc to join him. Later, in the Epilogue, Mephiles viciously taunts Boulder, who howls at him that the Worlds will never be his.

Shadows of Vengeance: Mephiles returns as the main antagonist in this story.

Storm of Warriors: Mephiles first appears in the Prologue, where he taunts Austin, making him sink into darkness, though the warrior wakes up. He later taunts Austin while the German Shepherd is held captive by Dark Enerjak in Dark Mobius. Austin struggles with his fear at first, but overcomes this and wakes up from the nightmare. Later, during the Final Battle, while Chaos Fox battles Dark Enerjak in the sky, the warriors on the ground notice their shadows lengthening and detaching, swarming to the side of the battle, where Mephiles taunts and then engages Austin Smith and Boulder, who soon gain help from Locke. He is then defeated by the living pair's new Z-Move, Splintered Stormshards, which also simultaneously weakens Dark Enerjak enough for Chaos Fox to finish him off. Mephiles' last physical appearance is when he appears to Boulder in a vision after the Lycanroc grabs the Scepter of Darkness in his jaws. He tells Boulder he's not finished with the Worlds, but recieves a furious growl in reply. The Scepter is then buried far from the Base.

The Warrior's Quest: Mephiles does not appear, but is mentioned a few times, as the War of Darkness is ongoing during Alex's flight from Downunda and his quest to find the Storming Base. His first mention is when Alex's father Turner is telling him a story of the War of Darkness, and mentions that after the Battle of Shadows, many people were afraid that Mephiles would return. The same subject is mentioned by an old grizzly bear named Jared when Alex overhears him talking about the War of Darkness.

After the Blackout: In the Prologue, Boulder and Austin check where they buried the Scepter of Darkness after the Lamarkie Standoff, and are relieved to find it untouched. Boulder remembers the War of Darkness with a shudder, feeling cold when he realizes he can still sense Mephiles' dark presence inside it, digging his claws into the ground. Later, Infinite uses a clone of Mephiles to torment a group of refugees from Red Gate City that he recently found, as the group had never seen Mephiles before, and Markus uneasily notes the resemblance to Shadow and his references to past events. As the warriors rebuild Red Gate, Infinite uses a clone of Mephiles and one of Dark Enerjak to try to stop them, but only succeeds in confusing the warriors that fought in the War.

Largely the same as in Sonic '06, Mephiles is capable of several things, most notably teleportation and time-travel at will. He can also send others through time for various reasons(this was given a brief mention in The Dusk Wolf). 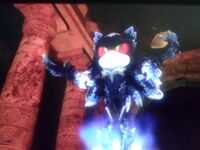 Dr. Eggman, Enerjak, Sonic.EXE, Dr. Finitevus, Infinite and Mephiles are all major antagonists in the series who are not original characters.

Retrieved from "https://sonicfanon.fandom.com/wiki/Mephiles_the_Dark_(Burpy%27s_Dream)?oldid=1802001"
Community content is available under CC-BY-SA unless otherwise noted.